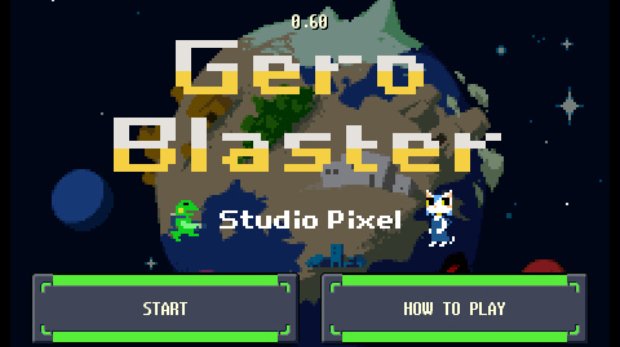 Daisuke “Pixel” Amaya has new game coming out in a matter of months. That news alone is sure to give fans of the illustrious one-man development team a strong case of the vapors. His latest creation is Gero Blaster, a run-and-gun action platformer created in the classic style. It even utilizes the old damsel in distress trope. The difference here is that the damsel in Gero Blaster is a cat, and the her boyfriend is a gun-toting frog. It is impossible for me not to love that, and that’s without even mentioning the giant smoking purple cat sticking its butt in the air.

It’s likely that Gero Blaster will have some ties to Cave Story. There were a couple of very nice Gero/Frog people in that game as well, though they didn’t have the steely-eyed, all business look found on the protagonist of this new game. Regardless of how it may be connected to Pixlel’s most popular game, Gero Blaster is one to watch for iPhone owners.

On top of that, it looks like Nicalis is already planning to bring the game to the 3DS, as it did with Cave Story, Ikachan and Guxt. That would be my console of choice here. Low-res pixel art in 3D looks amazing, and having a traditional control pad and buttons wouldn’t hurt either.

[Make sure to hit full screen on that tiny video!]