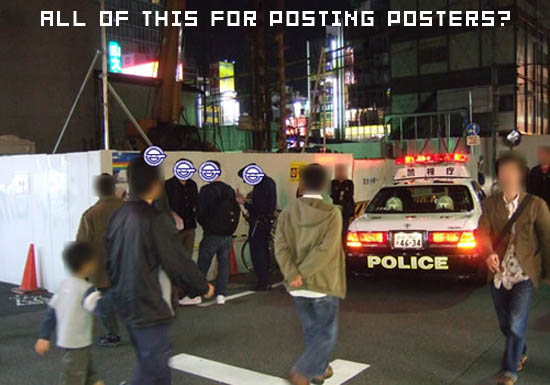 I’ll come right out and say that I always have had mad love for Hudson, NEC, the PC Engine, the TurboDuo, Bonk, and all related things, but even I missed the 20th birthdate of the PC Engine/TurboGrafx-16 on October 30th. Three German fans did not forget, but after being arrested, they might be wishing that they missed the date too.

While visiting Tokyo’s electronics mecca Akihabara, the three tourists felt they needed to celebrate (and advertise) by putting up posters and flyers for their site PCE Daisakusen!! (daisakusen means mission/operation in Japanese). The were stopped by police after posting the material up on the outside of a construction site. Eventually they were taken away by police car, and the parting photo on Akiba Blog looks rather sad.

You have to appreciate the group’s spirit. I hope they had their passports on them.

Filed under... #Hudson#Things gamers do