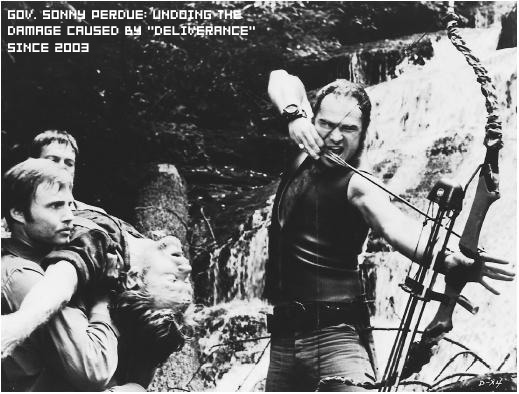 As Destructoid’s resident backwater, inbred, slack-jawed hillbilly, I’ve developed something of a thick skin when it comes to snarky remarks about slavery, obesity, illiteracy, conservative politics, and an overabundance of Bibles.

Well, the pinko-liberal sector can shove it where the sun don’t shine, since Georgia governor Sonny Perdue recently signed the 2008 Entertainment Industry Investment Act, effectively giving game developers in Georgia a 20% tax break. These tax incentives apply to movies, TV shows, commercials, music videos and, thankfully, video games. They also replace similar legislation that dates back to 2005, and Georgia joins France as one of the few places with leaders that understand video games as a medium and an industry. Hopefully, some other political mafiosos will pull their heads out of their respective arses — it’s easier to get your feet into your mouth that way.

What’s more, while Georgia’s new legislation is great for gamers, it’s great for the state economy as well. Ken Stewart, commissioner of the Georgia Department of Economic Development stated, “We expect to see an increase in the number of industry jobs and overall economic impact for the state in the coming years.” Tax breaks in the entertainment sector contributed $475 million to Georgia’s economy in 2006.

Bill Thompson, deputy commissioner of the Film, Music and Digital Entertainment Office, mentioned that “Georgia is one of the few states whose entertainment incentives support the video game industry.” Georgia may never be able to erase Captain Oglethorpe’s pre-colonial misadventures with a bunch of British debtors, but, while some of those “free thinking” and “progressive” states are keeping Tipper Gore’s close-minded legacy alive, Georgians will be able to enjoy their games without all that societal decay.

[Via The Duluth Weekly, via GamePolitics]