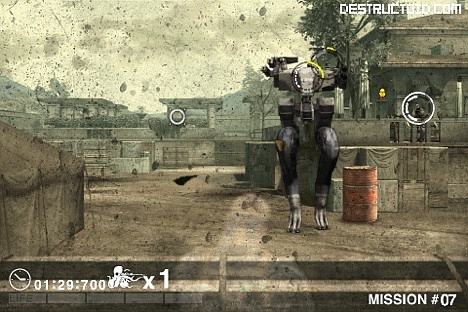 Konami tossed out a few more screenshots for the iPhone title, Metal Gear Solid Touch. As you can see it’s a lightgun-style game, starring Old Snake, his gun, and the war economy. The visuals are refreshingly crisp, not blurry or muddy like other “big” releases on the iPhone store as of late.

The story screen is of special interest to me, mainly because I fear it. Please, Konami, don’t kill me with story. I don’t want a playable Powerpoints or epic walls of text between levels. Nanomachines, DNA, and conspiracies are hip when I’m on the couch, but definitely not the best thing to wade through on the go. Just give me a gun, a blurb, and we’re good.

MGS Touch is due for a “special release” this Spring, It will have the initial 12 stages of the game. Later, the full version will be released and added as a free update.