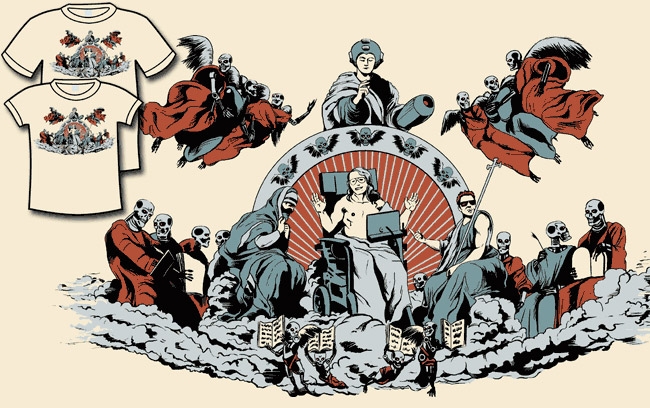 A brand new shirt from the creative mind behind the best Web comic on the Internets, Dr. McNinja, has recently released a new shirt that has nothing to do with the wonderful comic series. The new shirt is called the La Disputa del Cyborgio and spoofs a famous Christian painting that I have no idea what it’s called but it looks like the shirt but with less cyborgs and robots. Stephen Hawking is Jesus, the Terminators are all Angels or whatever and that’s Mega Man as God … I think. You can get the new shirt over on Topatoco for $18.

Hit the break to check out some more new shirts which include a couple of Space Invaders one, a general geeky shirt, a Blue Shell Mario Kart shirt and a awesome Sonic the Hedgehog shirt.

Threadless released around three new gaming related shirts over the last two weeks. “They’re Real” was created by Jean Salamin and depicts a couple of “real airplanes” as Space Invader aliens. The shirt is going for $18.

Another from Threadless, this “Alien Autopsy” design was created by Chris Rowson. Honestly, surprised I haven’t seen something as creative as this done before. Pick it up for $18.

The last Threadless design comes from Lawrence Villanueva. His design is called “I Be Au Sm” and represents our geeky heritage. An assortment of geeky stuff is all over the shirt including some videogame stuff. It’s available for $18.

CollegeHumor’s shirt store, Busted Tees, released a few new shirts this week, one of which is a nod to the Mario Kart series. The best/worst weapon in a game ever is proudly displayed on the shirt with the tagline “Second is the Best” written underneath the Blue Shell. You can get the Blue Shell shirt for 15% off this week only.

Last on this edition of Geek Chic is the Sonic Sprite Symbol shirt by Trunks and Soto. The shirt is made up of tiny Sonic sprites which all form to make Sonic’s head. Get it over on Shark Robot. (via Tiny Cartridge)