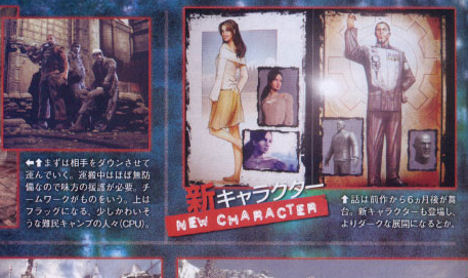 Got a couple of magazine scans for Gears of War 2 here, courtesy of the fine folks at Jeux France. There’s not a huge deal that will set the world alight, but of use to Gearheads will be the inclusion of artwork for two new human characters — one female and the other a rather well dressed male.

Not sure who they are yet, but I am certain those details will surface with all the swiftness of a pyromaniac’s cat. Hazarding a guess, I would say that the female is Dom’s wife. No clue as to the other guy, but if I know my action cliche’s, I’d put him down as a bureaucratic human who doesn’t like the way unorthodox Marcus Fenix busts ass and takes no prisoners, and eventually turns out to be a bad guy who is worse than the Locust because he is so treacherous and smartly dressed. That’s not what is actually going to happen though.

I’m really looking forward to Gears 2, no matter who these new guys are.