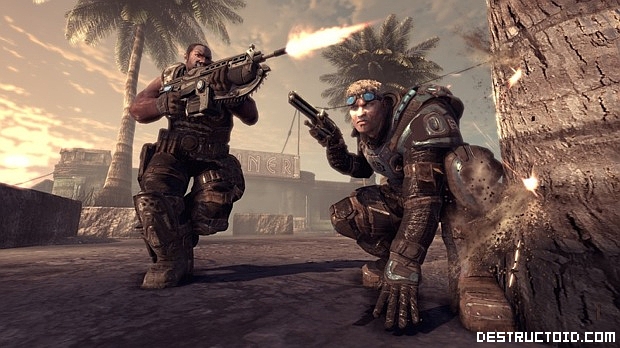 Epic Games just released two images taken from the Road to Ruin campaign mission included in the upcoming Gears of War 2 DLC, “Dark Corners.” As we said previously, “Dark Corners” isn’t a traditional bit of content. Road to Ruin is Epic’s first attempt at bringing downloadable single-player content to the series and it’s mildly different than the typical campaign stuff. In the add-on, players will be presented with a choice deep in the Locust Hollow: be stealthy or be Rambo.

Earlier this week, designer Cliff Bleszinksi talked about the Road to Ruin content on Major Nelson’s podcast. He revealed that it was a “ninety-minute” swathe of content cut from the game. In other words, Road to Ruin is ten sh–loads of new.

Interestingly, neither of the images have Dom and Marcus. Instead, we’re presented with Baird and Cole. We’re not complaining about it: it’s just that these two guys don’t look as cute as the dynamic duo in their little Theron outfits.

Gears of War 2 “Dark Corners” hits with the “All Fronts” collection on July 28 for fifteen bucks.

[Update: OK. OK. I forgot the Internet considers everything old. Anyway, here’s some more screens taken strictly from the multiplayer portion. These just hit my wire as well, but they’re probably old. Anything not released within the last six or seven seconds is old, right? Check out these ridiculously old screens in the gallery below.]