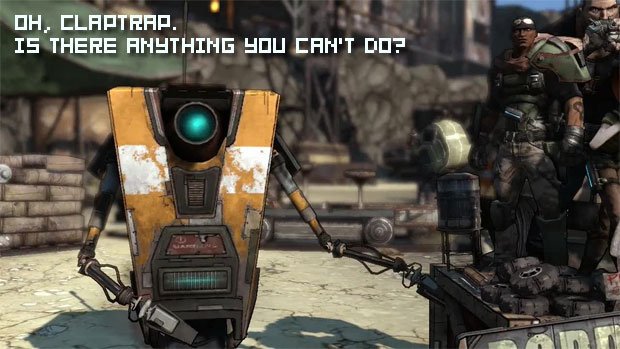 A double dose of Borderlands stories does the soul some good. Not long ago, CBS 11 News got together with Gearbox Software VP Brian Martel to discuss a range of topics, all of which were rooted in the studio’s latest game.

The full discussion, which you can watch here, is nearly eleven minutes in length. Knowing most of you busy people don’t have eleven minutes, That VideoGame Blog went about transcribing the key quotes beyond the stuff we already knew about Borderlands.

While Martel notes “Nintendo sells the most copies,” he states they aren’t about to port Borderlands to Wii “just because.” As he refreshingly puts it: “You don’t want to feel like you’re milking the product just to get it on the Wii, especially if it doesn’t really help the game.”

As for the future of Borderlands‘ rambunctious little scamp of a robot, Claptrap, Martel says “he’s a great character, we’d love to see him as a sort of a side-scroller character.” Whoa — that one came out of seemingly nowhere. Personally, I love Claptrap, and would love to see Gearbox flesh him out further.