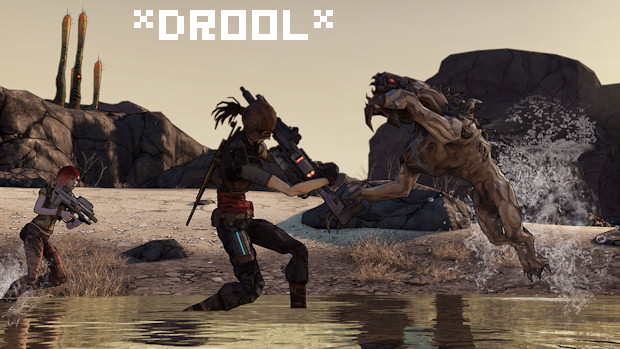 Wow … I don’t think I’ve seen a developer be quite so forthright in his willingness to admit that one version of a game is better than another, but Gearbox’s Randy Pitchford has laid his cards on the table, stating that the PC version of Borderlands “destroys” console versions, at least with the right hardware.

“The PC version destroys all the console versions in terms of the image fidelity — assuming you have the hardware for it,” explains Pitchford.

The Gearbox boss then tried to choose between PCs and consoles: “It’s tough. It’s very tough, I’ll tell ya. On one level I do like sitting on my couch with the surround sound and the wireless controller, on the other level I mean you will not get a better-looking image than in the PC version of the game.

“And when you’re playing a first-person shooter, the mouse and keyboard interface is still the best way to go. It’s a tough thing.”

I still disagree that mouse and keyboard makes for a superior control scheme. Maybe it makes games accurate to the point of mollycoddling, but I’ve been playing Left 4 Dead and a copy of AvP2 that Technophile gave me, and it’s just not comfortable for me to use keyboards. Still, in terms of image quality, there’s no contest, and this is a game being sold on its looks.

Still, my rubbish old laptop couldn’t even dream of running something like this, so I know which version I’ll have to get. In the meantime, PC fans can now preen their feathers and get all smug.