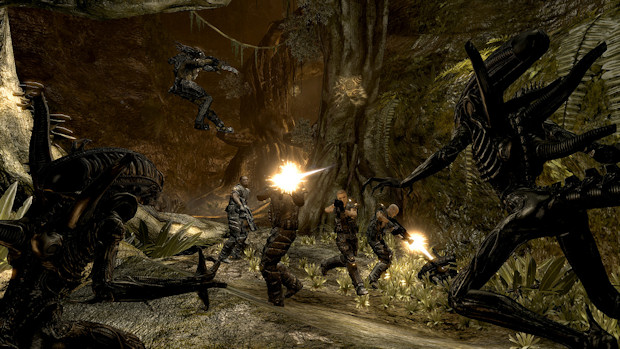 It must be odd for two studios to be working on the same game license simultaneously, but that’s the situation Gearbox Software and Rebellion find themselves in. Both studios are creating their own Aliens FPS for Sega — Gearbox has Aliens: Colonial Marines while Rebellion has Aliens vs. Predator. According to Rebellion, this has led to a friendly rivalry between the two.

“I think if we all want to produce the best possible game at the end of the day you’ve got to use your own imagination but keep pace with what other people are doing. We’re gamers as well and want as many good games as we can get in our hands,” says senior producer for AvP David Brickley. “There’s been some high-level contact at trade shows, stuff like that. Gentle ribbing and the trading of drunken ideas but nothing co-operative in that sense.”

Despite the fact that both games are set in the Aliens universe, however, Brickley contends that direct comparisons aren’t quite right: “There’s no point in being direct competition in that sense. Certainly [Colonial Marines is] a game that’s focused very much on the USCN so for that reason alone we’ve taken it in all sorts of different directions.”

Now that Borderlands is done and dusted, I hope Gearbox can start talking about Colonial Marines soon. I’m really looking forward to AvP, but I must admit that the more Aliens-focused game has captured my imagination just that little extra bit. That said, I might just be more interested because it’s been so elusive.