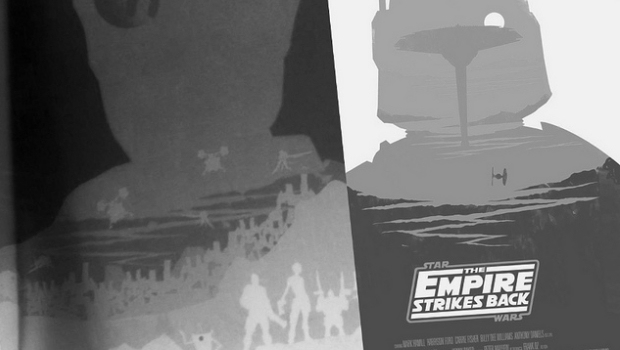 An art heist, but less exciting!

[Update: Randy Pitchford has reached out to Olly, stating:  “You’re amazing. Inspiration is part of art and you’ve inspired us. But the bit that was lifted is uncool, so… consequences.” Olly replied that he’d wished he’d never said anything because it wasn’t a big deal to him. In any case, Pitchford’s emailed the artist to “do it right and legit.”

Pretty much the classiest “dispute” ever. Love it.]

Artist Olly Moss has called a bit of Borderlands 2 artwork into question, noting some pretty significant similarities between his original Empire Strikes Back poster and a promotional image included in the game. The comparison is pretty damning.

Moss notes that certain elements of the Borderlands 2 image were “lifted straight out” of the original work, as you can see from the trailing pathway in the middle. While disappointed, Moss isn’t angry or considering anything more substantial than simply making people aware.

“Legal action? Chill out. It’s not a big deal,” he told fans baying for blood. “Just some insert art. Still, would have done it myself if they’d asked. Love their work.”

Hopefully this is resolved amicably, as Moss has been nothing but cordial and isn’t after anything more than acknowledgement. It is a cool image, and if Gearbox’s art team was influenced, it’d be nice for the original artist to get his credit.