During the 2012 Game Developers Conference, I had a chance to sit down with Jonathan Blow to talk about his new adventure/puzzle game The Witness. I would like to stress that what I played was a very early version, without most of the textures and/or graphical effects added in.

I can say this right now: if you loved Braid, you will love the Witness. It operates on the same core concept — making you feel like a freakin’ genius. Instead of a 2D linear world, though, all of the puzzles are built around a fully open island.

The Witness starts you off alone in a small corridor in the dark. Controls are very simple and have the standard dual analog look-move system and an action button. As you progress through a tunnel, you are very steadily introduced to blue glowing panels. These are the primary means the player has to interact with the world. Walking up to one and pressing the action button allows you to drag a cursor through mazes. In each area of the island, new parts are added to this basic form.

Once you step out of the starting area and into the open world, you are greeted with an incredible visual contrast. The island stretches out before you, inviting you to explore. Doors, narrative chunks, and clues are everywhere. And this is where The Witness shines. By using the environment — both to hide and display key aspects of the game — Blow and his team have managed to put an enormous amount of content in a relatively compact space. 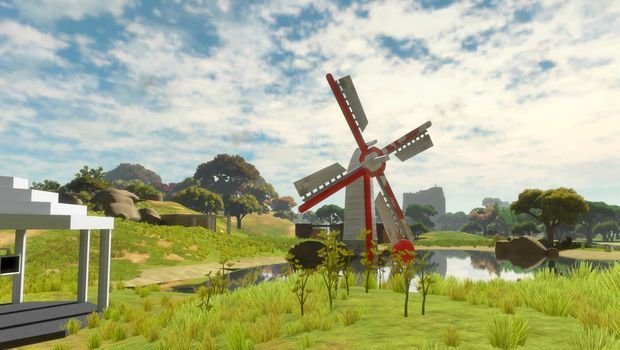 The standout moment for me was coming up on a series of panel-based challenges on the far side of the island. They were tucked away in a structure that loosely resembled a jungle gym with several spikes jutting out in seemingly random directions. It took me a few minutes, but I eventually realized that those spikes cast shadows on the panels and that in order to progress, I needed to complete the maze without touching any of the dark areas. The final segment of that series is really cleverly done, and, just in case that series does make it into the final game, I won’t ruin it by putting the solution here.

By steadily introducing the player to subtle variances of what they have already seen before, The Witness creates the same satisfying progression and nuanced complexity that Braid had. The build that I played had some technical issues, which is to be expected given that the game is still very early in its development. But there is great potential here and it is probably the most impressive thing I’ve seen at GDC so far. It definitely toys with your expectations, but if you like puzzlers at all, you will be thoroughly impressed.