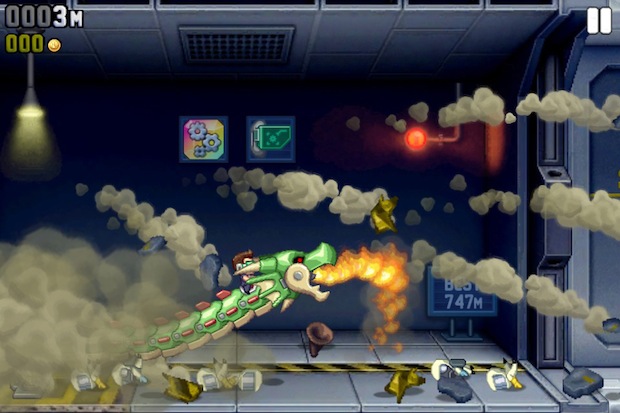 We met with Halfbrick’s Phil Larsen yesterday here at GDC to eat all of his candy and steal all of his beers in his hotel suite. During this invasion he showed off a bit of Jetpack Joyride’s upcoming update, which will introduce equippable gadgets to the iOS mega-hit.

Mr. Steakfries can now equip up to two of these new gadgets to give him special abilities to do things like earn more coins. One named Ezy-Dodge Missiles slows missiles down so they can be avoided a bit more easily. Fancy shoes called Air Barrys, shown above, let him jump over obstacles easier. There’s fifteen in all, and mixing and matching them will open up hundreds customization combinations, some with special combination names. We saw a range increasing combo that Barry first encapsulated in a bouncy ball after biffing, and then turning into ice to slide even farther. Pretty slick.

The Jetpack Joyride 1.3 update is the biggest one since the game’s launch, and it will be free when it launches some time in April.