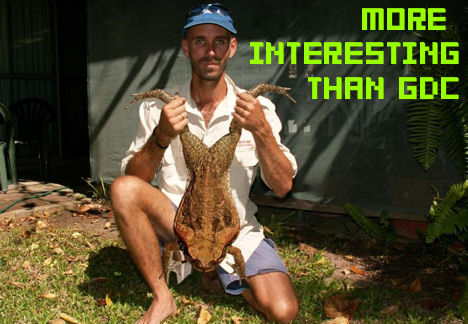 EA Mythic’s creative designer Paul Barnett has criticized the annual Game Developers Conference, slamming it for being a “combative” experience where narrow-mindedness and boredom runs riot. He also wants GDC to be hosted by a dancing bear wearing a fez. He never said that bit, but who doesn’t want that?

We talk about design, mechanics, philosophy of design. All I was going to hear about was: WoW and the Activision merger. Whether Spore is going to be any good. How do I get into the games industry? Would you like a job? You’re going to be fired. Why don’t you start a label?

That’s a huge lump of disillusion if I’ve ever seen one. So, GDC = boring and stupid peacock display. That’s surprising, as I always felt we had some good stuff coming out of that conference, and really, are other shows any better? I can’t imagine E3 being anything less than all of the above. That said, until the GDC organizers get a dance instructor, a bear, a fez and the desire to make all our dreams a reality, GDC will never live up to its potential.