Last year, developer Grasshopper Manufacture showed off a very simple demo of Lollipop Chainsaw at several major gaming conventions. It was a very basic demo in my eyes, one that was more to show the potential of things to come.

I got to go hands-on again last night with the latest version of Lollipop Chainsaw and the difference is like night and day. I was looking forward to the game regardless, but last night easily clinched the deal as there’s just so much more content than I was expecting. It also helps that I was laughing and literally saying “What the fuck?!” out loud almost every other minute throughout my hands-on time.

The demo Warner Bros showed off last night began with main protagonist Juliet Starling and her body-less boyfriend, Nick, riding along in Gideon Starling’s — Juliet’s father — motorcycle to save her sister, Rosalind. Gideon doesn’t take too kindly to Juliet’s boyfriend, and after some hilarious exchanges the trio arrive at their destination — an arcade packed with zombies. Gideon splits off to sneak into the arcade from the back while Juliet and Nick charge in straight through the front entrance.

Once inside I immediately see how much more evolved the combat has gotten. Juliet can perform strong chainsaw attacks with Y, low chainsaw attacks with A, X unleashes her cheerleader melee attacks and B sees the sassy heroine perform a jump dodge move. Stringing all four buttons in various combinations will allow players to perform a variety of fluid and different attacks. Additionally, the right bumper lets you perform a chainsaw thrusting charge attack, right trigger gives you a temporary strength increase and the left trigger pulls out the shotgun-like Chainsaw Blaster. 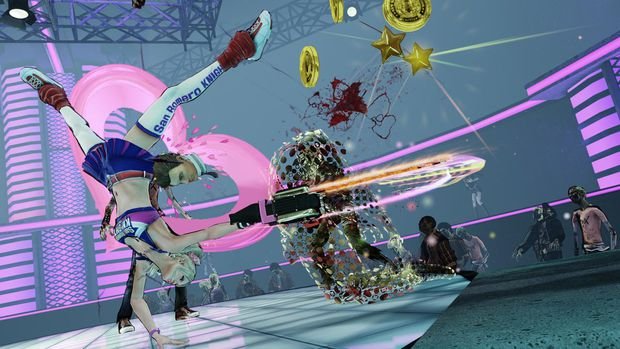 Killing zombies and saving humans will earn you coins which you can use to upgrade Juliet at the ChoptoShop.zom store located throughout each stage. Here you can purchase health, new attack skills, clothing, MP3s, art and more. Juliet’s main source of health are lollipops, which you can use to recharge your health by pressing on any of the D-pad buttons. It’s important to always pay attention to your health meter too, as you don’t get any sort of warning when you’re running low.

After killing a ton of zombies, I had to go up to an arcade cabinet and basically got sucked into the game, Tron style. Suda 51 loves retro games and you’ll be getting sucked into at least a few different types of arcade titles. The first one is a Pac-Man-like game where you have to collect keys while avoiding giant dog heads wearing fez hats. Once completed, you’re thrown back into the real world and have to make your way to the next arcade cabinet. Other arcade games will see you going into the world of Elevator Action, Pong and more.

There were a couple of points where you’ll have to use Nick to advance in a level. During these moments, a headless blue glowing body will jump out from nowhere and you have to pop Nick’s head on the body. From here, Nick starts to do a weird dance as Juliet does a cheerleading routine. While this is going on, Quick Time Event button prompts are popping up on the screen and you have to press a series of buttons to make sure the dance goes off perfectly. 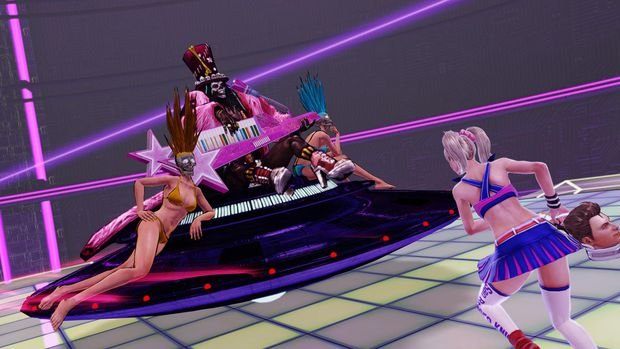 QTE instances happened a lot during my hands on, but each time it was in a unique way and usually made me laugh. The only annoying QTE instance I experienced was when Juliet would get knocked down by enemies. You have to rapidly press the B button to get Juliet back up. The annoyance here is that it seems to take longer than needed for her to get up. I did at least notice in the upgrade store that you can make her recovery time faster though.

The end of the level sees you taking on Josey, a keytar-wielding zombie Rock Lord. Josey is flying around in a flying saucer-like ship that has a couple of hot-ish dead ladies hanging out on it. I think it’s easier if you just look at the above picture to see for yourself. Anyway, the boss fight sees you using your Chainsaw Blaster for the most part to take Josey out and the battle ends with Juliet and her dad double teaming the boss and saving Rosalind.

The last thing I need to mention is that the music is absolutely wonderful. The original score by Akira Yamaoka was amazing and the way the licensed music is being used fits perfectly. Oh yes, Chordettes’s “Lollipop” is in the game.

Everything I saw in Lollipop Chainsaw was simply great and very refreshing as a game hasn’t made me laugh like this in a long time. It should go without saying, but Lollipop Chainsaw is one you shouldn’t miss out on this year.