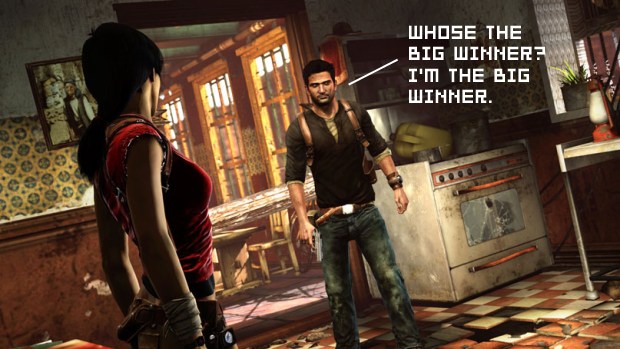 In case you hadn’t noticed the Game Developer’s Conference went on this week. You should check it out, we’ve been talking about it. For the past ten years at GDC they’ve been handing out awards as part of the Game Developer’s Choice Awards. The winners are in for this year and it looks like Naughty Dog’s Uncharted 2: Among Thieves has done the best, pulling in five awards including Best Writing and the Game of the Year award. Nice to see the the developers got it right like we did.

Other big winners for the night were Runic Games’ Torchlight, which brought home the prize for Best Debut Game; Batman: Arkham Asylum by Rocksteady Studios’, which got the Best Design award; 5th Cell’s Scribblenauts, which got the Innovation Award; thatgamecompany’s Flower, which received Best Downloadable Game; Zynga’s Farmville, which won the first ever Best New Social/Online Game award.

All of those seem pretty deserving in my opinion and I struggle to come up with some other options. However, I cannot agree with their choice with Best Handheld Game, which went to the aforementioned Scribblenauts. Innovative? Yes. Best handheld game of the year? Far from it. There’s a difference between trying something new and making the best handheld game of the year. In my opinion this ranks somewhere up there with Shakespeare in Love taking the Oscar over Saving Private Ryan.

Also given out were a few special awards. John Carmack got a Lifetime Achievement award for being John Carmack. Gabe Newell received the Pioneer Award “for his work in co-creating PC key digital download service Steam, and helping to make possible some of the most important video games of recent years,” and the Penny Arcade guys received the Ambassador Award for being awesome.

Full list of prizes and winners after the jump.