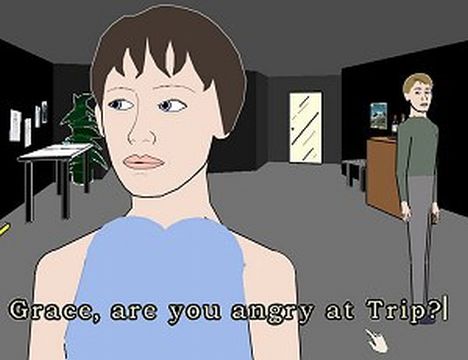 I attended a session at GDC today within the Serious Game Summit called Next Gen Conversational Characters for Serious Games. If you’re choking on your own boredom already, never fear: I promise to keep all the dry tidbits to myself. There was some material that got me thinking though, and I’ll bet a large percent of gamers have thought about it too.

Speakers Michael Mateas and Andrew Stern created a game called Facade in which you interact with a couple who are clearly having marital challenges. How is that fun, you ask? Well, the game is bitingly funny, but what makes it even more unique it that it uses a concept called NLU (Natural Language Understanding) to allow the player to have an open-ended interaction with the characters. Instead of choosing your replies from a list of preset responses, you type anything you may want to say and the characters react in real time.

While the game certainly looks simple in appearance, I think this format of character interaction is a hidden gem. It leads me to thinking: How different could games be if they were less linear and more open ended in the way they played out? It reminds me a little bit of the Zork era, which seems all but lost. I for one have spent way too much time running around towns talking to boring inhabitants just so I could trigger some story event or clue. I could have been shaving my goddamn legs.

Are you tired of being trapped in linear structure in games, especially when interacting with characters? Or do you daydream about having interactions with game characters that you don’t jam the B button to skip?

Filed under... #Developer stuff#GDC#Living the dream