When Sucker Punch released inFamous in 2009, the open-world action title had fewer than 100 missions — 99, to be exact. For a game of its ilk, that’s nothing to sneeze at.

But Sucker Punch has bigger ideas for the game’s sequel, which hits PlayStation 3 on July 7. The developer is assuring that in theory, there will be an unlimited number of missions throughout the game’s lifespan, thanks you to: inFamous 2 will have a user-generated mission feature.

LittleBigPlanet in my inFamous 2? Pretty much. Sucker Punch is opening up the world of New Marais by providing a unique set of tools that will allow users to create their own in-game missions. The developer is promising a full set of props, in-game characters (both good and bad), and behaviors that enterprising mission designers can use to create their own scenarios.

Because Sucker Punch is completely opening up this tool set to players, the types of missions they’ll be able to create won’t be limited. If you want to mirror mission types already in the game with your own twist, that’s fine — defense missions, escort missions, and survival missions are all waiting to be created. But beyond that, and because these missions don’t necessarily have to be bound to game canon, the sky really is the limit. 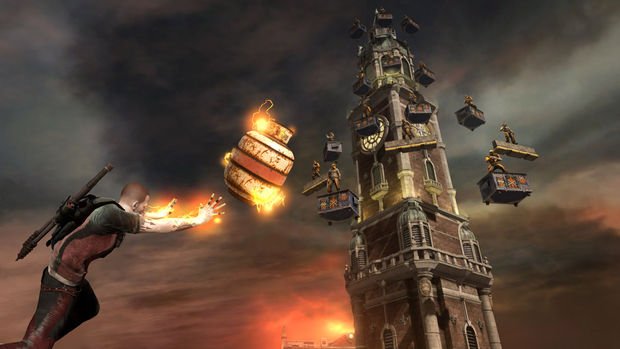 Want to turn inFamous into a platforming game? Done. Use the user-generated-content-specific “rings” to create a timed race across the streets and rooftops of New Marais. During one user-generated demo mission, I watched as Cole tossed propane tanks at militia members dancing on floating platforms. It was a score-based game — almost like bowling for soldiers — as the player earned points for exploding the platforms. Another mission was tower-defense style, with Cole fending off increasingly difficult waves of enemies as they attempted to breach a bridge.

The tools, much like LittleBigPlanet‘s, look relatively easy for a newbie to use. It’s not unlike level creation in something like ModNation Racers, where you choose objects and place them nearly anywhere in the game world. A radial menu pops up; you choose your object and place it in the world. Behaviors of enemies and objects can also be tweaked, including skills and powers available to Cole throughout the mission. The idea, Sucker Punch says, is to provide a level of depth that will allow players to design unique missions unlike anything that ships on the disc.

Where will these user-generated missions go? In the game world, of course. Instead of accessing them from a separate menu, everything is integrated into the single-player game. That’s right, from the start you’ll be able to access user-generated content right beside Sucker Punch’s own campaign missions. Simply approach mission markers, indicated in green along with the creator’s name, and it’s off to the races. 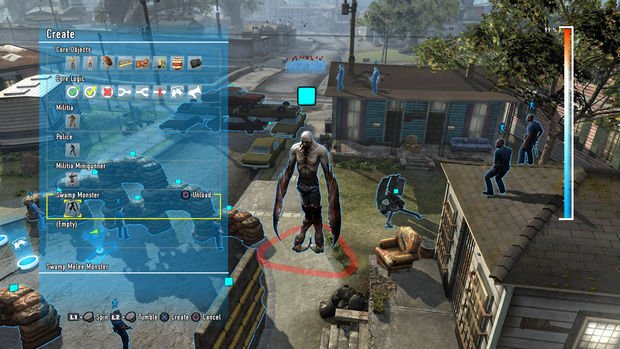 For those concerned that user-generated content will litter the world, cluttering up the single-player experience, rest easy. While the “top tier” of created content (what will be called “Sucker Punch Featured Content”) is on by default, filters can be used to tailor your mission experience to your needs. When designing missions, players will be able to use a tagging system to help identify mission types, making it easier to find what you want. And because missions can be rated by users after completion, finding the best of the best (a tier Sucker Punch is calling “Famous”) should be a snap.

For those looking to get their hands on the tools, great news: starting in early April, Sucker Punch will be launching a limited public beta for inFamous 2 and its user-created content. While details are scarce, specifics will be announced on March 14 on the game’s official website. Much of the content will be wiped before the game’s retail release, but Sucker Punch plans to choose the best missions to be made available immediately when the game ships.

inFamous 2 is schedule to ship on June 7, 2011. If things work out like Sucker Punch hopes, you’ll be playing it for a long, long time after that.