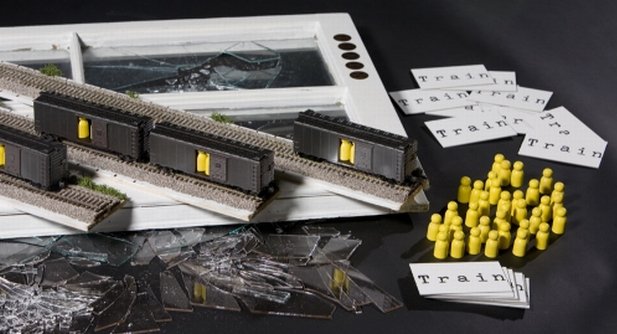 I’d read about Brenda Brathwaite’s Train before but, in honesty, I’d never bought any of the hype. A board game about trains with a twist ending that reveals you’re actually sending your pieces to Auschwitz? Please. You’re telling me that people not only break down sobbing while playing the game, but that people actually started crying during Brathwaite’s talk about the game?

I mentally called shenanigans. Chalked up the overzealous reactions to the sort of artsy-fartsy desire for games to be Taken Really Seriously, without any basis in actual emotion.

After exiting Brathwaite’s updated version of her talk, ”

Train (or How I Dumped Electricity and Learned to Love Design)” with the unmistakable sensation of my tear duct beginning — just beginning — to fill, I understood just how wrong I’d been.

Hit the jump for my summary of the talk.

For a summary of what prompted Brathwaite to make a game like Train in the first place, I’d suggest reading this article from The Escapist. Brathwaite’s talk this morning covered much new ground, but the basic story of why Brathwaite moved from videogames to board games hasn’t changed.

What has changed has been the reaction to Train: much to her surprise, Brathwaite effectively took the game on tour over the past year, showcasing the game to the Wall Street Journal and MIT, taking note of the different reactions players have had to the game.

But I’m getting ahead of myself. All human-on-human tragedy, Brathwaite said, works by some sort of system. And if you have a system, then you can create a game.

Train is a board game that, at least initially, tasks players with getting as many yellow game pieces from one end of the game board to the other. In an average turn, the player can choose to move their train forward, put more people into the train, draw a card, or take a card. After reaching the end of the track with one train, the player draws a card revealing the destination they’ve arrived at.

All of the possible destinations are concentration camps. Auschwitz, Dachau. Brathwaite described the moment of realization as “a fall from a hundred feet up,” once the now-victorious player realizes what he or she has just done.

This isn’t the end of the game. Train‘s rules (typed up on a genuine Nazi typewriter) specify that “the game is over when it ends.” After figuring out where the trains are going, you can choose to stop playing or, as some players did, try to actually rebel against the rules and sabotage the game by intentionally trying to draw derail cards.

When a train in the game gets derailed, two things happen: half the people go back to the beginning of the board, and the others refuse to board the train. The game pieces simply sit on the board, and can no longer be manipulated. Brathwaite intentionally refused to explain exactly what had happened to those pieces. Some players assume that the tokens are dead, some assume that they’ve escaped and gone to Denmark. This process of volunteering your own narrative isn’t lazy design or metagaming, Brathwaite seemed to suggest, but an integral part of the game that makes the player feel complicit in what they’re doing.

Brathwaite briefly relayed an anecdote wherein a player reached the end of the board, found out where she was going, and then went back and started loading another train without saying anything. When asked what she was doing, and if she understood what was going on, she responded that she did — she just assumed that she was playing as a conductor or something, and that he probably had kids to feed, so why not just keep going?

Interestingly, Brathwaite noted that when people play Train, even when they privately realize what the game is about they never tell the other players. Brathwaite had no idea why this was (though an audience member later suggested that it might be that players simply didn’t want to spoil the experience of realizing the theme for everyone else).

This, Braithwaite argued, is the sort of freedom of play you generally can’t achieve in digital games. The tactile details of the game (the train openings are too small for the Jew pieces, so you’ve got to cram them in there, which becomes a sort of horrifying action once players realize exactly what they’re doing) and the “complexity of human choice” the board game format allows simply wouldn’t work in a computer.

The board itself sits on a frame filled with broken glass (presumably representing Krystallnacht). At one point when showcasing the game, a Rabbi saw the board, paused, and said that he understood what the game was about.

“I don’t want to play it,” he said. “You just did,” Brathwaite replied.

As described by Brathwaite, the act of play didn’t lead up to an ultimately bullshit “gotcha” moment like I’d assumed. The Auschwitz revelation is but one aspect of an entire experience designed to make players question the way they follow rules, and how they’ll behave once they understand what’s going on, and how complicit they’re willing to be.

Train‘s spontaneous popularity resulted in a lot of backlash: people have told Brathwaite to stop making games, and that she should be punched in the face for creating Train.

Perhaps part of this reaction came from the fact that Train isn’t “fun,” by any stretch of the imagination. “Why do games have to be fun?”, Brathwaite asked. Schindler’s List isn’t fun. “No other medium is like, oh, it’s gotta be fun.”

In creating Train, Brathwaite understood just how many design constraints she’d unthinkingly accepted during her years as a digital game designer: for instance, that games need to have concrete win/loss conditions, or strictly designer-authored meaning, or that games must be fun in some way.

Still, the act of creating Train made (as the talk’s title would suggest) Brathwaite fall in love with pure game design. ”

Board games,” Brathwaite said, “taught me a lot of our problems have solutions, and that games are way more diverse than we give them credit for.”

“I fell in love with the potential power of the medium, and saw mechanics as more powerful than paint,” Brathwaite said.