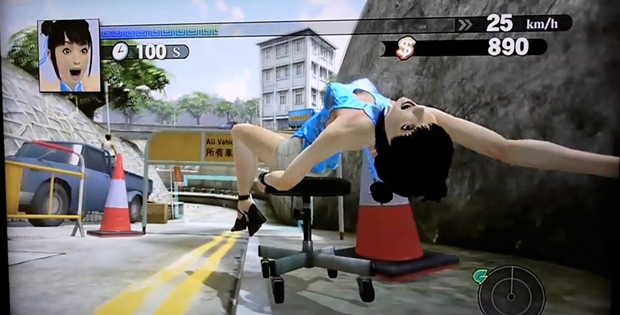 I’ve played a few Move games, but the one I just played (above) is the best so far. It’s called Slider, and it is the only Move game so far from SCEJ.

Slider is set in Hong Kong. A poor office boss and his lovely secretary are holed up in their office. The bills are overdue and the mafia is out to get them. Their only escape? Office equipment. You’ll play as either the boss or the sexy, long-legged secretary, and you’ll use an office chair to slide downhill, working to avoid enemies and obstacles. I asked Slider producer George Weising if anyone used the boss instead of the lovely bun-haired, busty girl. He said, “I do…sometimes.”

“Most people don’t, though.”

I wouldn’t either. The girl is hot.

This uses one PlayStation Move controller. It’s tilted to steer downhill. Buttons let you perform tricks. You can grind on rails and do fancy turns. The whole goal is to get to the bottom of the hill, working to get to your busted up old van to make your escape. What we dig is the secretary’s ass sticking out during her chair ride. What we also dig is that this is like a sexy Crazy Taxi throwback. I’m quite serious when I say that this is my favorite Move game so far.

When you watch the video, look at her face in the upper left corner. Hilarious.

We were told that Slider will ship at Move’s launch.