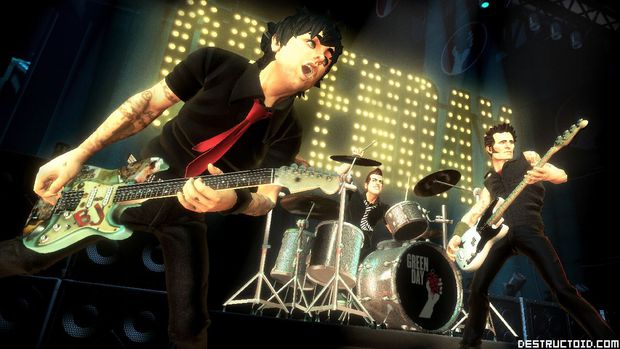 Harmonix and MTV Games have taken the week of GDC to premiere and drop some of the final details on the upcoming Green Day: Rock Band, which is set to his shelves on June 8.

From the looks of things, Green Day is getting a similar treatment to The Beatles, with a game that includes many of the same features. Three part harmonies have made the cut, and players can unlock 100 collectibles images and 40 minutes of rare video and performances as they work through Green Day’s 20-plus-year career.

The game will ship with 47 tracks (fully exportable for Xbox 360 and PS3 for a small fee). At a party last night where the game itself was premiered, five of game’s songs were revealed: “Brain Stew/Jaded,” “Hitchin’ A Ride,” “American Idiot,” “Wake Me Up When September Ends,” and “Boulevard of Broken Dreams.” I’ll admit that I’d be more excited about Naked City’s Torture Garden: Rock Band, but it was surprising how many of these songs I knew note for note. It didn’t take much to get an entire room full of people tapping and singing along, which is a good indicator that the songs are a great fit for this style of game.

Green Day: Rock Band will be available in a few flavors. Standalone disc games for the Xbox 360, PlayStation 3, and Wii were a given. But a Green Day: Rock Band Plus will also be made available for Xbox 360 and PS3, and includes special packaging (shown in our gallery), free of charge song export, and six Green Day tracks via DLC.

June should be a good month for Green Day fans; everyone else can continue to whine about how Green Day is getting a game, and patiently wait for more news on Rock Band 3.