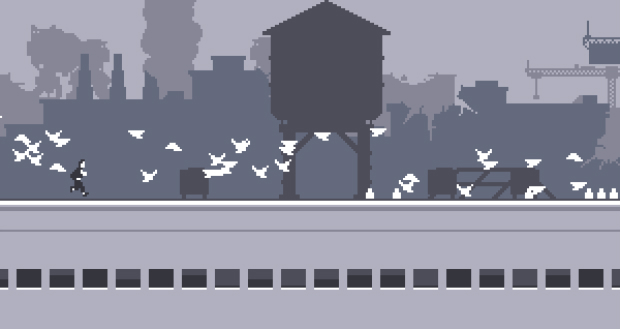 Canabalt is one of my favorite iPhone games ever. It’s very simple, yet so fun and addictive. Lots of other people think so too. Both the iPhone and free online versions have become a hit, garnering recognition from all sorts of places. That’s why creator Adam Saltsman and iPhone porter Eric Johnson were a part of GDC 10’s iPhone Summit this year.

There, before a crowd of convention-goers, they unveiled many secrets, and even made a really big announcement. If you love Canabalt as much as I do, hit the jump for the summary and get some insight.

They began the talk by asking the audience to name a game genre that they really enjoy. A few people spoke up with different answers, but ultimately, “platformer” was chosen. Curiously, Saltsman took a backseat at that point. He worked on… something all the while.

For the unknowing, Johnson described Canabalt as “a guy in a suit running from rooftop to rooftop during an alien invasion”. The game was made by Saltsman for an Experimental Gameplay Project, where the theme was “Bare Minimum”. That was why the one-button control scheme was chosen.

He then rattled off a few of the games that inspired Canabalt‘s look: Flashback, Another World, and the first Prince of Persia. Screenshots of each were shown on the projector screen, and just looking at them, the influence was obvious. He loved the way that the first two games made complex looking environments using only a few colors. The main characters from these three games were heavily influential as well; like them, the main character of Canabalt moves very fluidly.

He also showed us examples of the bits and pieces the game’s visuals were built with. They’re pretty much Legos; they snap together into randomly generated combinations, heights and widths to create the various buildings you run across.

The level generation was inspired by the traditional “the further you go, the harder it gets” formula, which evolved into a speed formula; that is to say, now the game gets harder according to how fast you’re running. But they didn’t want players to be forced into that situation. The solution were the various obstacles the game randomly generates. If you move too fast, you can purposefully run into a box or chair and slow yourself down, thus lessening the difficulty.

The next subject was marketing. Though server costs got a little out of hand, having a free online version of the game available did more good than harm. It allowed people to try the game out before buying it, which was important because of Canabalt‘s price point. Most iPhone games are 99 cents, but it retails for $2.99. So if they enjoy the online version and want more, they can buy the app and feel good about supporting indies. This philosophy worked well for them, and it’s something they look to do again with future releases.

There were also a few aggregators that helped market the game. From a single link on Stumbleupon, the website received around 190,000 hits over the course of a few days. Then there’s the advertisement help the game got from social networking. After death, the game will ask you if you want to post your score to your Twitter, and through those alone, over 50,000 hits have been generated. 115,000 units were sold in the first five months.

Johnson went back to the price point for a moment, and how it was a very controversial thing. A lot of people weren’t willing to spend more than the usual amount on the game, but the team seemed to have no regrets about their decision. “If you sell a game at 99 cents, you have to make the top ten list to sustain a company. Canabalt reached 36.”

They tried to see if a lower price point would help the sales of another game, but it seemed to have no real effect. They may not have even been able to try the $2.99 price point if they didn’t have the online version to act as a trial. Despite the higher price, the game sold relatively well, and has much less one star reviews (which usually only accompanied complaints about the price) than any top ten 99 cent game.

He then moved on to describing the more technical aspects of how both versions of the game came together. There was mention of Saltsman’s gamemaking tool Flixel, of course.  Anyone can quickly and cheaply make games with it, as evidenced by Canabalt itself; the Flash version was built in just five days. The iPhone port was similarly quick, taking only two weeks.

But this port was extremely dirty, so a bit of optimization had to be done. From the Flixel-to-iPhone optimization process came a new tool… Flixel for iPhone. To demonstrate how awesome it is, Saltsman finally spoke again. He had programmed a touch control platformer (remember the genre they picked out at the beginning?) in the half hour the talk had gone on for, and put it up on the projector screen for everyone to see.

It was awesome, as evidenced by my inability to end this summary in any other way. It was freaking awesome. Adam Saltsman is some sort of wizard.