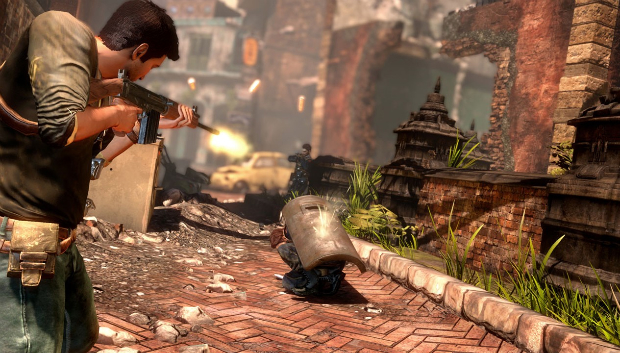 Uncharted 2 delivers what its devs called an “active cinematic experience.” “Active” represents player interaction, “cinematic” represents the “movie quality” they want their games to have, and “experience” represents the sum of all the game’s parts.

At Naughty Dog, they’re all about creating an awesome story. They shape their games around it, with their goal being to get the player emotionally invested. The purpose of their GDC talk was to give other developers a look at how such a game is created.

If that sounds interesting to you, hit the jump for a summary of the talk. Also, spoilers.

Even though Uncharted 2 is hinged on story, it and gameplay have to be considered at the same time when making a game of its ilk. This is because one can motivate the other; if story is shoehorned in later on in development, the game will suffer for it. Naughty Dog’s narrative story team is also the gameplay team. This makes things a lot easier, because the two need to be able to constantly communicate and collaborate.

When coming up with a story, the first question to ask is, “What genre are we working on?” The one you choose will help to define your story, setting, characters, mechanics and pacing. When making the Uncharted games, they started by knowing they wanted to work with the pulp-action adventure genre.

“You have to understand the genre inside and out before making decisions about your story,” they told the audience. Naughty Dog researched the genre they chose extensively, looking at movies like National Treasure, The Mummy, Die Hard, and the Indiana Jones series for inspiration.

Once you’ve got your genre, it will make it easier to ground your game. Grounding defines your limitations to help you better create a believable world with believable characters. For example, they would never have Nathan Drake use a jetpack to get to the top of a building. It just wouldn’t match the character or the world.

An actual example of grounding was taken from one of the game’s first missions: in it, Nathan and Flynn break into a museum and have to get past a lot of guards. Instead of giving the player many weapons to do the job, they only have a tranquilizer gun for this section. They did this because Nathan Drake’s character would never kill innocents, and it was the only way to ensure that the player couldn’t screw that up.

While story beats are represented by cutscenes, pacing is the gameplay sequences sandwiched between them. It is crucial in maintaining a player’s interest throughout the course of an active cinematic experience.

After a cutscene, a player’s interest tends to dip until they get to the next bit of story. But Naughty Dog wanted to make the in-between more like a rollercoaster than a steady trip. This is why Uncharted 2‘s gameplay almost constantly changes without any set order. As they very succinctly put it, “When you get bored, switch yo’ shit up.”

If your cutscenes are too close, there’s not enough gameplay, and if they’re too far apart, there’s not enough motivation to get the player to the next one. The guys pointed out that they had the latter problem in the part of the game where Schafer gets kidnapped. They tried to make the gameplay more varied, which led into their next topic, a design element they dubbed “the gap.”

Basically, a gap is an unexpected element that comes in during gameplay, which changes your initial goal. The example they gave for this was the well-known Nepal section. The first goal is for Nathan and Chloe to get to the goal, but that alone is not a very interesting story.

Then comes the first gap: the attack helicopter.

Next on their list of topics was contrast. They used this technique to make Uncharted 2‘s dramatic moments really stand out. In the museum, Drake gets to the treasure, which is an upbeat moment. But then Flynn takes the treasure for himself, creating a downbeat moment. Them working together was contrasted by the betrayal.

Cutscenes are a huge part of the Uncharted 2 experience. The biggest point they stressed about them was that they should not be made to show big action sequences, but to show emotional moments. Without the input of the player, these scenes can show exactly the story the game wants to tell.

Because each one is emotionally important, the transition between gameplay and cutscenes have to be as smooth as possible. The guys pointed out that many developers do a poor job of transitioning by not preparing for potential continuity breaks; if, for example, your character is facing a different way than when the cutscene starts, it can really pull you out of the game. So what’s a better way to make a transition? The way they did it in Uncharted 2, of course!

Most transitions in the game happen during forced player actions. For example, while at the wrecked train, the game forces the player to jump off of it at a certain point, at which point the cutscene begins. The truck scene mentioned earlier is another example, as the cutscene won’t trigger until the player moves Nathan to a specific area of the map. It’s much easier to make a smooth transition from something like that.

Next, they discussed scenes, which are the miniature stories they fit inside of the broader story arc. Unlike gaps, which do not constitute any emotional change, these always accompany a minor change in the protagonist. The example they gave us for this concept was Nathan’s arrival to Nepal. The climax of the scene occurs when Nathan gets cornered by a truck, then Chloe comes in, blows it up, and the scene ends. Nathan’s world is changed; Chloe is back in his life and he didn’t get killed.

They stressed how important it is to have the tone of the gameplay match up with the tone of the narrative. At this point, they looked at the injured cameraman scene, where Nathan must carry the aforementioned cameraman while under fire. The in-game consequences for this are that he can’t take cover or move as quickly as usual. Character states from previous cutscenes are also maintained through the gameplay sequence; in this case, Chloe is pissed off at Nathan, so she says abrasive things and stays ahead, while Elena says supportive things and stays back to cover him.

This led to a discussion about conflict. “Conflict is the only thing that moves your story forward,” they said, moving on to the next topic. There are three levels of conflict: extra-personal, personal, and inner conflict. The cameraman scene was engaging because all three were used.

But they had a problem when trying to design Flynn’s death. The relationship between him and Nathan was built up and torn down several times throughout the course of the story. There is even a point where you are forced to work with him again, as enemies. All of this conflict was manufactured to build up emotional hate toward Flynn’s character, so that it could be resolved in a boss fight by the player. Unfortunately, time ran out and they couldn’t quite line up character motivation, so they had to kill him in a cutscene instead. In the future, they will try to pinpoint problems like these earlier.

To round out their talk, they touched on a few smaller ways they made the world and characters of Uncharted 2 feel more alive. Dialogue was a huge one, of course, but another important one was giving them contextual movesets. A few examples they gave were Nathan putting his hands up when near fire, shivering in the cold, and stumbling when hurt. They also replaced inappropriate actions in certain places, like the Tibetan town, where the button that normally punches gives out handshakes.

In conclusion, they told their audience, “Stop thinking about stories being seperate from gameplay.” They’ve got the right idea in thinking this way, as the process behind Uncharted 2 has made evident.