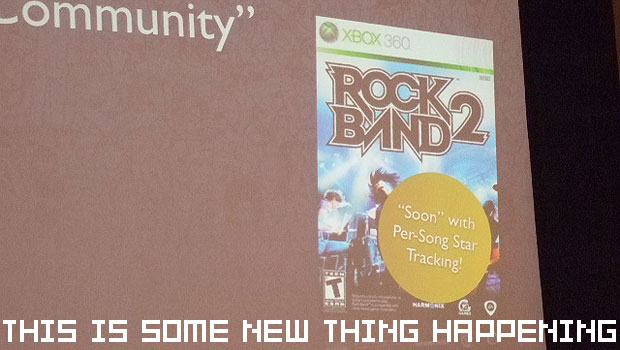 According to the designer, user feedback indicated that some players wanted an option to view information on highest stars achieved in the game per song. With that in mind, gamers should expect a game update in the future.

“Just like we did with Rock Band 1‘s ‘World Tour’ rebalance,” he said, “we’re going to add a way to do this, not just in Rock Band 2, but in our future titles.”

The news elicited a tiny, weak-sounding “whoo” from one person sitting in on the session; the game currently only lists high-score information per song. No further details (date, when we could expect the update) were mentioned. Teasdale did, however, call me out for my arm-wrestling skills in not one, but two slides. The gauntlet has been thrown.