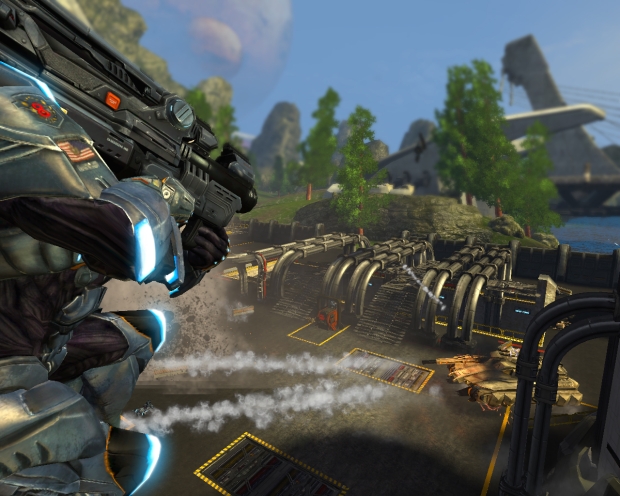 It’s the future and humans have been leaving Earth to settle on colonies all across space. Everything has been going fine and dandy until one day, some of the colonies stopped all contact with Earth. Obviously something has gone wrong so the Earth sends in the 8th Armor Infantry.

The 8th Armor Infantry is a volunteer unit made up of crazies. See, the 8AI are the only units of the government that are sent into a battle from orbit in nothing but their power suits. So yeah, you’d have to be crazy to volunteer for something like that. But hey, they get badass looking power suits and I’d totally volunteer too for a suit like that.

The 8AI get to the bottom of things and discover that a group called the Armed Front has rebelled against the Earth and are slowly taking over colonies. The game sees the 8AI taking back Earth’s colonies and then taking the fight straight to the Armed Front’s home worlds. 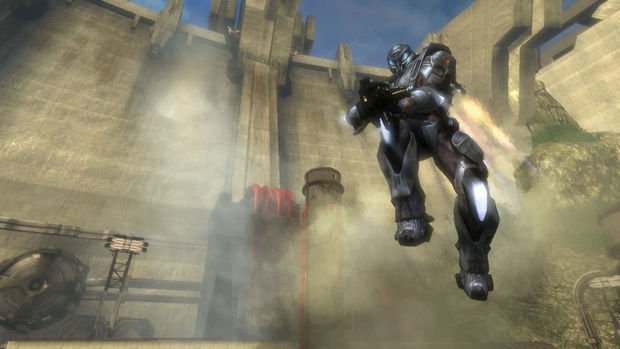 Section 8 easily has the best spawning system ever. Like I said before the jump, the soldiers in the game are launched from a spaceship that’s orbiting the planet. The same applies in multiplayer too. You’ll spawn high in the sky and torpedo down to the ground.

Before a player spawns in, they will pick their weapon load out and choose where on the map they will drop at. When the player is ready, they’re taken into the game and are already flying down to the ground. Players have jet packs that they can activate when they get to a certain distance near the ground. The jet packs can be used as air brakes and to move away from the drop point in the event their it gets compromised.

The best part about dropping in is that you can instantly kill someone by landing on them. Everyone, good and bad, can be seen via the map before spawning in (and during matches), and if you see someone standing still, then go get the drop on him! And yes, that’s totally going to be an achievement. Players can also land on tanks and other vehicles and damage them. Certain areas on the map are marked with a red radius, indicating that there are anti-air guns at that location. You can still jump there, but expect to be shot out of the sky if you do. If a group of you jump into a anti-air zone, a couple will die but the majority of the team will get on through.

As stated, players can select a load out before dropping in and this comes in three parts. First, there are the guns. You can select two guns to take into battle with you ranging from assault rifles, snipers, shotguns, pistols and rocket launchers. All the weapons are realistic in the sense that they’re like the weapons we have now but futurefied. So don’t expect any laser canons, plasma blasters or energy yo-yos. 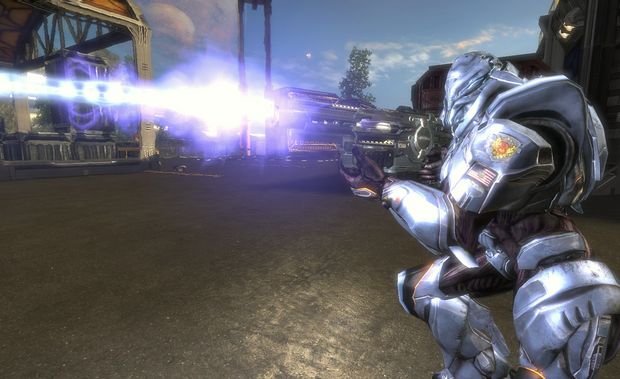 After equipping yourself with guns, you then select your Active Gear, which are your grenades, knives, C4 and other throwable objects. The grenades are smart, so if you accidentally throw a grenade near your own teammates, the grenade will fizzle out instead of blowing up. On top of that, you can hold down the throw button and see the exact path your grenade will take, including how it will bounce off objects.

Last, you have your Passive Gear. This allows you to tweak your power suit to best fit your needs. If you like to snipe, you can customize your suit so you can run faster and cloak yourself for longer periods of time. If you’re more of a brawler, you can increase your strength and shields (all characters and vehicles have shields that slowly recharge after getting damaged. Think Protoss from StarCraft).

The map we played on was pretty huge and looked like you would need vehicles to get anywhere. The power suit has you covered though as you can burst into a sprint and move about pretty fast. The camera pans out to a third-person view while in the sprint and you can’t use your weapons until you stop. However, you can tackle into people while sprinting and knock them over. You can also combine your jetpack with the sprint for a super jump. Both the jetpack and sprinting have a meter that needs to recharge before you’re able to use them again.

As you’re playing through multiplayer, you will earn points that allow you to call in for support items. You can call in for tanks, mechs, turrets and even a supply depot that will allow you to switch out your weapons load out. The mechs are like Lost Planet’s mechs, except on a slightly smaller scale and not as annoying to control. If you’re in a mech and near a player that’s near death, you can grab the weakened enemy and spike them into the ground like a football. 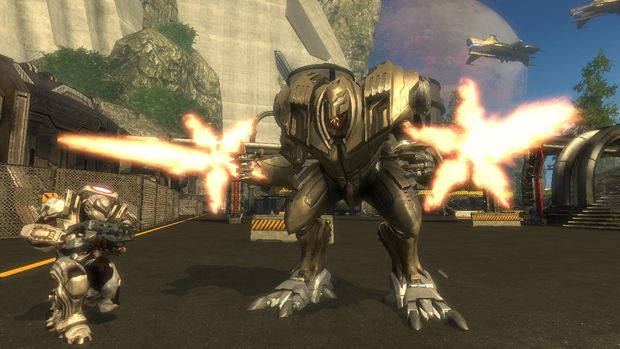 Section 8 supports up to 16 players on the Xbox 360 and PlayStation 3 and 32 players on the PC. There will also be bot support, which reminded me a lot of Perfect Dark 64’s bots (mostly because that’s the only FPS game I played that had bots). The bots were pretty dumb, but this was an Alpha build so there’s still time to fix things up before the game is released this Fall.

Aside from the traditional team deathmatch, there will be objective based games people can play. The objective based stuff will require teamwork as you’ll gain perks for winning. If you’re on the side that needs to kill a VIP and are successful, you’ll gain access to support items that the opposing team won’t have access to until they win a round.

Overall, Section 8 holds the potential to be pretty fun. There’s work that needs to be done on the bots and I only saw one (of the eight) maps leaving me curious as to how varied multiplayer will be. Otherwise, it looks good visually, controls well and I’ve never had so much fun spawning before.