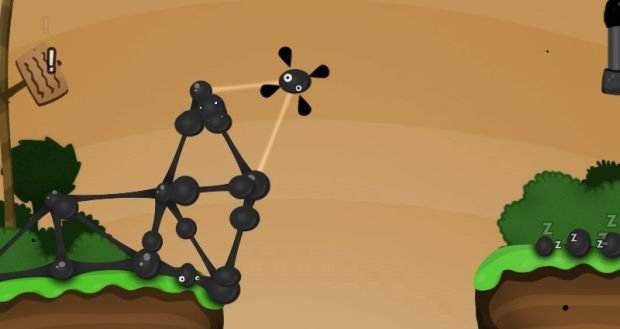 …”But were afraid to ask,” is the end of that headline.

Ron Carmel, 1/2 of the 2DBoy development team that created World of Goo, kicked off this year’s Independent Games Summit at GDC by outlining the development history of the greatest goo-based construction game ever created.

As a surprisingly practical guide to the hazards and benefits of going indie, I left the talk remarkably confident: though Carmel was pragmatic in discussing the exact costs and profits (in actual numbers, which practically nobody does) of going indie, he also expressed a lot of confidence and given 2DBoy’s success, it became pretty contagious the more he talked.

Hit the jump for a rundown of his presentation.

Carmel kicked off the talk with the issue of starting a company, which he said most people find scary, despite how objectively simple it is: one need only register hte company, get a tax ID number, and open up a bank account.

But this is boring, he said. You’re not starting a company, you’re making a game. And that’s even simpler: just save money, quit your job, and make a game.

Initial budget estimates for World of Goo outlined $4k for hardware, $1k for software, $5000 for a QA person, unexpected costs for localization and legal fees ($5k each), and living expenses of $2k per month per developer (of which there are only two, remember). They initially assumed the game would take 8 months to make, but it ended up taking literally three times as long, which made the living budget around  $96k just for living expenses alone. Carmel suggested reducing your living expenses (by moving in with your parents, say), making a smaller game, or doing contract work (but ONLY if it’s short term and pays reasonably well, because otherwise you’re just delaying your game) to cut down on this most significant expense.

Carmel then moved on and presented a simple formula: eyeballs * hotness = sales. To make sure your game actually sells, he provided a list:

2. Get press by emailing indie-friendly outlets like Destructoid, Penny Arcade, RockPaperShotgun, or Destructoid to get exposure for your game.

3. Establish a web presence in some way. Carmel cited his adoration for Wolfire Games’ blog, where David Rosen occasionally does video game design tours of popular indie games. The design tours are great and though they don’t have anything explicitly to do with Wolfire Games’ upcoming game Overgrowth, they keep people coming back to the site with regularity.

4. Take pre-orders and release early. Don’t worry about blowing your wad by releasing an early demo or showing too much — just get people thinking about it in the way that Petri Purho did with Crayon Physics Deluxe.

Then it was onto distribution, where Carmel suggested making the game as easy to purchase as possible and finding as many distribution outlets as possible. A pie chart showed that more than half the game’s purchases came from Wiiware, 25% came from the site, and early on in the game’s release cycle this outnumbered the actual sales from Steam. Retail only accounted for 2-3% of sales, which was vastly disprpoprtionate to how much time the team took negotiating for retail sales in the first place.

A “revenue by region” graph showed that more than half the sales came from the US, about a third to a fourth came from Europe, and the rest came from either Australia and New Zealand or other places around the globe.

Moving onto the issue of finding publishers, Carmel outlined the reason most indies want to find one for their game: they provide funding and retail. Given that Carmel’s graphs unquestionably showed that retail was a waste of time, however, the sole benefit of a publisher relationship is funding. Signing a contract initially seemed great for 2DBoy, but, in Carmel’s words, the wedding band eventually turned into the evil ring from the LOTR trilogy.

A good publisher should serve your objectives (in 2DBoy’s case, by providing freedom and a maximum upside). Carmel ran down the publisher deals 2DBoy tried to work out throughout development, which gradually increased both in the amount of up-front cash they’d get and the percentage of royalties afforded to them. The juiciest deal, providing $700k upfront and 25% royalties, turned sour when 2DBoy realized that there were an assload of hidden rights that the publisher got to keep and arbitrary deductions for shipping or ports or whatever that ended up taking more of that royalty money than was initially estimated, in addition to the loss of many IP rights (even though the contract said that the creators got to retain all of them).

2DBoy decided they could probably make enough sales to make up for the $700k up front money they’d get from the publisher in addition to keeping the IP rights and full royalties, so they opted out of a publisher, self-funded production, and went digital. If you do go retail, Carmel suggested, do per-country flat fee deals and treat them like a prison exchange: “First the money, then the girl.”

On the subject of getting your game digitally distributed, Carmel suggested both doing it yourself (as 2DBoy did with preorders from their official site) and going after the big boys like Steam and XBLA first, because if one of the big boys takes your game, all the littler ones will as well. Find ways to creatively nag the big boys because they have to deal with people asking for their games to be supported every day; 2DBoy didn’t get a response from Steam until they sent an early copy of World of Goo to Erik Wolpaw.

Release your game at the same time everywhere, with a uniform price. Carmel hypothesized that the game’s early North America only release probably enhanced their piracy rate, which led into his next point about not including DRM because cracked versions will always exist and will be empirically more enjoyable experiences for players because they won’t require you to input a 32-character serial key.

Carmel then showed another graph tracking the game’s sales after release, which notably spiked everytime the game became available on a new distribution platform or received a notable amount of press or experienced a sale. Steam’s recent 75% off sale accounted for the single most profitable day in the game’s entire launch history. Steam and Nintendo are great at promoting stuff, Carmel said, so if they offer to do so you should really let them.

The Linux community also gave the game a sales spike that was twice as large as that on the game’s PC launch day when the Linux port came out.

Carmel closed by suggesting that indie developers should talk to their fellow indies: “we are your friends,” his final slide read, “not your competition.” He then opened up for questions.

Someone asked him to reiterate his stance on providing a DRM-free exe, which prompted Carmel to explain that if you look at it now, World of Goo doesn’t really have a drastically different piracy rate than most other games.

Another audience member asked for more detail on the first step of quitting one’s job, and how Carmel did it. Carmel replied that he worked at EA but was frustrated at the nonexistent creative control he was afforded. He quit his job and thought, “what’s the worst that could happen?” He could lose some of his savings, but he could always just get another job. He sheepishly admitted that this attitude doesn’t really apply now given the recession, but that, hey, you only live once.

Why Wiiware rather than XBLA or PSN, someone asked. Because the control scheme sucks on a regular analog controller and they didn’t want to release an inferior product, he replied.

Upon being asked if he feltlike he had more job security now as an indie than he did when working for EA, Carmel responded that he had “zero job security…but it doesn’t matter that much anymore.” The room erupted in a round of applause, championing World of Goo‘s success.

Was there any conflict between the business and creative ends of production? Carmel insisted that WoG was to be created with design taking precedence over finance. 2DBoy began to stress by the 2nd year as cash began to run out, but designer Kyle Gabler kept pushing for perfectionism in every aspect of the design, which is why the game is as good as it is (Carmel had earlier quipped that “I would have cut hundreds of corners”).

Someone invariably asked what 2DBoy’s next game will be, to which Carmel replied: “We’re gonna make a game called The Sophomore Effect, an intentionally mediocre game.” In earnest, he went on to say that they really didn’t know.