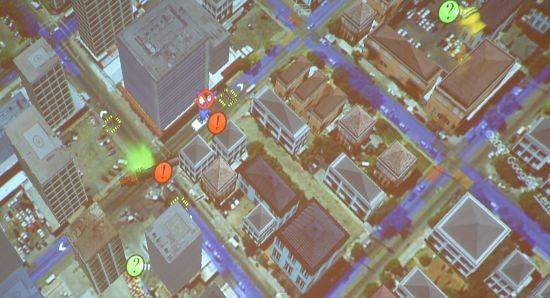 Be cool, angry liberals — this isn’t some sort of wire-tapping, waterboarding simulation we’re talking about, here.

No, Homeland Security’s training game is a perfectly admirable attempt to train first responders on how to react to catastrophic events: from WMDs to wild gunmen, Ground Truth simulates every worst case scenario imaginable and forces the player (who might one day have to deal with the real thing) to handle it. Donna Djordjevich discussed the game in this morning’s Serious Games lecture, “The Ground Truth of Game Technologies for Homeland Security Training.”

Hit the jump for the deets on this clever, if a little disturbing, piece of job training.

Ground Truth just completed the first of a three-year development cycle. The project has been internally funded by the Sandia National Laboratories, itself related to the Homeland Security Systems and Development Center.

The game has already been sent to numerous law enforcement and first response units across the country, who have in turn provided (generally positive) feedback. Ground Truth seeks to specifically simulate the decision making processs a first responder might have to go through during a real catastrophic event; simulating these events in the form of a videogame help teach players the immediate consequences of their decisions, and what they need to do better in the future.

The game includes several scenarios, and Djordjevich showed us the toxic gas mission. Upon loading up the game and witnessing a toxic chemical spill, the player must evacuate citizens from affected areas, shelter citizens in the path o fhte gas, and respond to all 911 calls during the emergency. 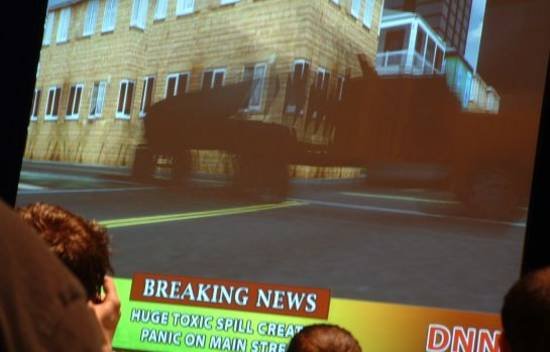 This is, of course, easier said than done. Not only will the player have to deal with phony or irrelevant 911 calls, but wind direction which can shift the toxic gas, traffic pileups which can put more civilians in danger, and highly intelligent law enforcement NPCs. A fireman, for example, will refuse to run into an affected area without a gas mask, and a police officer might rush out on his own to save an orphanage without being ordered to.

Each game lasts only 20 minutes: according to Djordjevich, the game’s length was tailored to accomodate the busy schedules of first responders, who wouldn’t have time to spend 3 hours in front of a computer. Ideally, Ground Truth is the sort of game which can be played once a day over several months, always teaching the player something new or reinforcing old ideas.

Sandia National Laboratories received frequent feedback from Subject Matter Experts, who helped them make the game more functional and intuitive. Indeed, the game looked very simple and easy to pick up, and Djordjevich claimed that many law enforcement officers had said so.

The game was mainly programmed by USC students, which Djordjevich lightheartedly referred to as something of a double-edged sword: the students were incredibly motivated and worked for cheap, but they also have the tendency to take job offers or leave the project when they graduate. 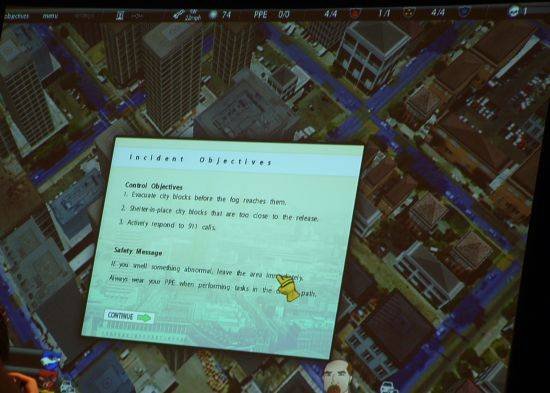 After showing us a little more of the game, it was time for questions.

One audience member asked how the game’s target audience (first responders of various ages) reacted to the fact that the training tool is, of all things, a videogame. Djordjevich immediately responded, “they love it.” While the elder first responders initially had trouble using the mouse to control everything, they respected the idea that players could see immediate consequences to their actions. This immediate feedback, Djordjevich said, is exactly what rookie first responders need.

The next question concerned the future of the game, and Djordjevich stated that Sandia would like to add further adaptive training to the game, as well as automatically uploadable play stats which could be used to continually improve the game.

After a few smaller questions, the seminar was over. I left with a significant sense of respect for all first responders; after seeing all the crap they simultaneously have to do in face of the physical and emotional stress brought on by a catastrophe, I can definitely see the usefulness for a game like Ground Truth.