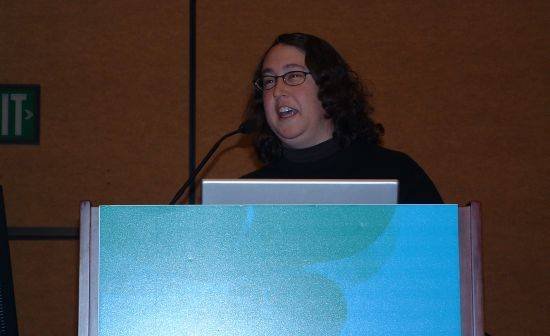 I was present for Tracy Fullerton’s Serious Games lecture on The Night Journey yesterday, and found her to be a singularly iconoclastic indie designer. She seemed to have a lot of respect for the idea of serious, independent games, and seemed (at least where Night Journey was concerned) to be taking some really unconventional approaches to game design.

This morning at the Independent Games Summit, Fullerton gave another presentation on the future of indie games. While I assumed she’d be talking about specific, innovative indie games on the horizon, her talk was much more theoretical and imperative. She spoke not necessarily of what indie games will be, but of what they are and what they should be.

Fullerton kicked off the lecture by referring to her USC game design track as “the bastion of indie game-making.” The University of Southern California’s bachelor and master’s programs for game design was responsible for Cloud, Darfur is Dying, Passively Multiplayer Online Game, and the minds who would eventually go on to create flOw. The program received an initial endowment from Electronic Arts (seriously), and industry personalities from Activision and Sony both occasionally drop in and help mentor the students.

From there, Fullerton moved into a discussion of what games currently are. She spoke of what she called “moments of catastrophic changes in perception,” stating that we never notice them until after they’ve already happened — unless we’re a part of making those changes come about. She feels indie games are going through one of these changes in perception, and have indeed always been exactly as intelligent and effective as many are just now understanding.

“Being indie isn’t about finding a backdoor way into the industry,” Fullerton said. Being indie is about self-expression in this particular moment in time, using game design to creat personal, reflective, timely, and meaningful aesthetic works. “Design isn’t a set of rules,” she said. “It’s a state of mind.”

Fullerton went on to point out certain concepts which recent indie games have effectively tackled, with an accompanying screenshot slide for each concept. Indie games have discussed subtle ideas (Passage), impossible relationships (The Marriage), and what Fullerton referred to as potentially mistaken ideas which nonetheless should be explored in detail (Super Columbine Massacre RPG).

She encouraged indie designers to experiment in unorthodox ways. Indie games should have a “reckless, incompatible spirit” when compared with more mainstream industry titles. She pointed out that GDC included a talk on the death of the casual game, which only a year ago was considered the last truly free medium of games expression. If even casual games are now being “genre-ized,” then Fullerton suggests that new indie gamers need to start doing completely off-the-wall, original, experimental things in their own games.

She encouraged designers to “take a stage dive” in the realm of game design — maybe you’ll fall flat on your face, maybe you’ll be caught, but what matters is that you did something seemingly arbitrary because it was important to you.  She referenced the German professors of Bahaus from decades ago, who taught seemingly counterproductive, but ultimately revolutionary ideas to their students.  She doesn’t currently see a lot of revolutionary game design being taught to students, and she didn’t hesitate to show her irritation about this fact.

Still, she felt confident in the idea that “the indies of tomorrow are actually the industry of tomorrow.” She didn’t really qualify this statement in any detail: as much as I’d love to believe that revolutionary and iconoclastic types of game design will eventually become the norm, I see no reason whatsoever to believe that our current industry model would allow for such a thing.

After her talk, it was time for questions. She talked about the requirements for acceptance to USC’s game design program (communication skills are a must, as are good grades and personal creative projects) right before mentioning the difficult balance between satisfying USC’s academic wishes for her students while still teaching them unusual, revolutionary design ideas.

Overall, I felt the talk sounded very good, but it ultimately just felt like a pep talk. Heavy on enthusiasm but light on practical advice, Fullerton wants indie gamers to be unusual and revolutionary and ambitious, but she didn’t do a very detailed job of explaining how, or even why.