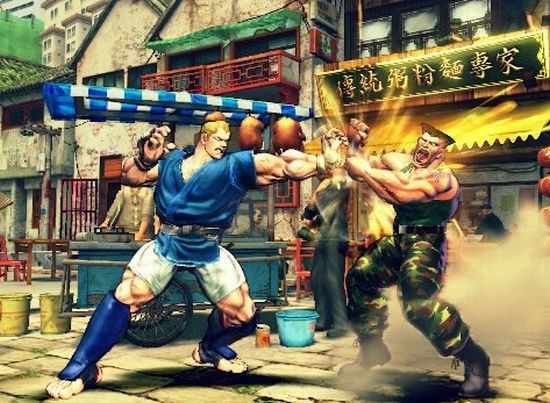 Yes, I got to put Capcom’s long, long, long-awaited franchise update, Street Fighter IV, through its paces — as did several other bloodthirsty journalists at Capcom’s suite demonstration. And yes, we’re all legendary now. You may touch us! For we have experienced Street Fighter IV!

Having put in quite a few rounds, I definitely find myself agreeing with those who insist that it’s not a game you can judge based on screenshots or online videos — you have to see it running before your very eyes to really get a sense of the new art style. How you’ll react to it? Well, that really depends. Hit the jump for my take.

As I mentioned a moment ago, IV is really nothing you can evaluate properly without seeing it for yourself. Up close, it’s a vibrant, colorful, bright game, and one really gets a sense of how Capcom was trying to convey the classic feel of previous titles in the series with this new 3D engine. It has its ups and downs, but we’ll get to that in a minute– for now, the meat of the matter: gameplay.

Nick Chester and I, among several others, knocked eachother around on a pair of arcade machines — the lowered, bench-sittin’ sort that are designed to sit back-to-back. Even after some seven or eight matches, I had trouble putting a finger on what exactly felt so different about this latest incarnation of the classic fighter. All of the classic fighters and moves are intact, and the new Revenge system and ultra combos are, in terms of control, mere extensions of previously existing motions and combos that we’re already used to. But what’s really curious is the hit detection — an unfortunate casualty of the jump to 3D.

This isn’t to say that hit detection in previous 2D fighters was altogether perfect; it’s a refined art, and one that needs to be carefully developed. But through my time with SFIV I wasn’t able to get a sense of what constituted a hit — chalk it up to the game’s ongoing development or what have you, but it’s something I’d like to see tightened. 3D or not, fighting on a two-dimensional plane requires precise, reliable hit detection.

But changes in the engine notwithstanding, the spirit is there. The gameplay, graciously restrained to two-dimensional fighting, feels similar in speed and style to Street Fighter III — not too fast, not World Warrior heart-breakingly slow. I’m bollocks with a joystick, but I imagine getting my hands on a proper fighter pad for us console newbs with Street Fighter IV will make me that much more comfortable with the game. Blanka feels like Blanka, Ken feels like Ken — and loathe though we sprite elitists may be to admit it, the jump to three dimensional graphics doesn’t destroy that feeling.

And like I said before the jump, the graphical style will likely rub people in different ways. Purists will likely bemoan the new graphics, but Capcom’s attempt to retain the series’ visual style is a noble one, if not a little misguided. Some of the characters look a little too… exaggerated versus their two-dimensional counterparts. But if you loosen the grip on your nostalgia just a bit, what you’ll find is that the world of Street Fighter IV in motion is a breathtakingly beautiful one — the backgrounds are vivid and insanely pretty in motion, and the characters are a joy to watch, particularly in the subtleties of their animation.

Oh! And before I forget: newbie Abel is something else — kind of like the disgusting, half-formed baby of Street Fighter and Tekken. While many of his moves are decidedly familiar to those who know and love the series, many of his most impressive assaults are combos begun by a quarter-circle and a kick, followed by forward-presses with an accompanying punch or kick, allowing players to string together some really cool combos. An interesting addition to the mix, to say the least.

While SNK pulled off the transition to 3D with a little more finesse in terms of fealty to tradition with King of Fighters 2009, Street Fighter IV is hardly the jihad on tradition that many decried when it was originally unveiled, but your milage may vary insofar as initial reactions are concerned. But take my word for it: wait until you see it for yourself, play it for yourself. Underneath the new face is an evolved take on the game we’ve loved for over a decade.