Following in the footsteps other visiting Japanese composers like last year’s guest, Koji Kondo, composer Masafumi Takada comes to the 2008 Game Developers Conference to talk about how he creates music for games.

Takada has scored several games for Goichi Suda, working as the lead composer, head sound designer, and jokingly, fire protection supervisor of Grasshopper Manufacture. Some titles include Killer 7, Michigan, and most recently, No More Heroes. He also scored Capcom’s God Hand and Resident Evil: The Umbrella Chronicles, and has even contributed work to Nintendo’s Super Smash Bros. Brawl.

The overall theme of Takada music making method is translation. In his hour-long panel he used video and sound examples from four games to cover the various techniques he uses to translate game concepts to original music.

Hit the jump to read more on Takada’s music.

For Resident Evil: Umbrella Chronicles, Takada showed a video of gameplay and explained that he wanted to remain true to Resident Evil’s roots, but also have the music fit an on-the-rails shooter. Takada used the original RE melodies and spiced them up with more percussion tracks, a faster tempo, and even some electric guitar.

When first working for Shinji Mikami on God Hand, Takada was coming up dry musically. It took a a trip to Mikami’s offices in Osaka to get things going, and it was there that he decided that he might try imagining what Mikami himself would sound like as music. That triggered the idea of creating relaxing and nostalgic music to help with the game’s frantic pace, and this eventually became the theme of God Hand’s score.

Due to the range of varied enviroments of the levels in Killer 7, Takada had a difficult time coming up with an overall musical theme for the game. It was difficult to cater to the individual musical needs of each stage. After some expermentation, he decided to use sound effects and musical transitions to bring the project together. 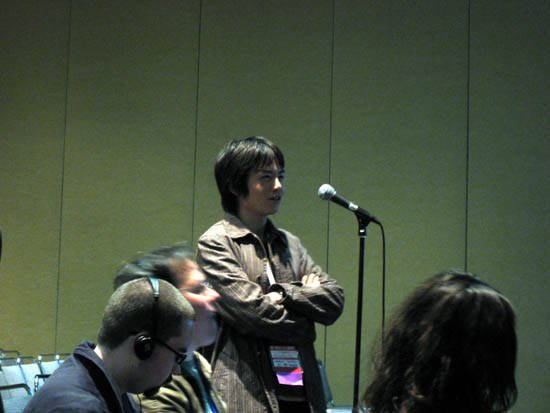 At the end of the panel, Takada revealed that a remix album of his work on No More Heroes will be available soon. He also says that he is working on the score to Steel Batallion next. Finally, at the end of a Q&A session, Takada answered a surprise question from Super Smash Bros. creator Masahiro Sakurai. Sakurai showered Takada with praise for his musical diversity and talent.