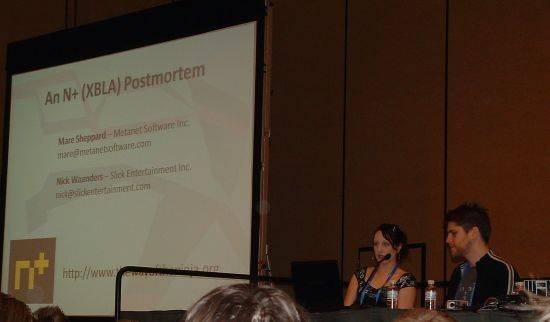 You know what comes out tomorrow on XBLA?

If you aren’t already excited for it, then I honestly don’t understand you. We’re talking about one of the most incredible flash platformers of all time, ported to XBLA with way more levels and numerous graphical and difficulty curve improvements.

Wanna know more about the process of porting the original flash game to XBLA, along with a cohesive month-by-month summary of what a budding XBLA developer should expect in creating their game?

If so, hit the jump.

The N+ postmortem was handled by two speakers: Mare Sheppard, half of the two-person team that is Metanet Software, and Nick Waanders of Slick Entertainment, who ported the original flash title to XBLA.

The two sought to give direct, practical advice to would-be indie designers who want to get their games picked up by Microsoft. Sheppard stated that, since Metanet was essentially a very small, inexperienced game company, it was absolutely necessary that they create a protoype of their game which they could then show to Microsoft to prove their skills, as it were.

That “protoype” was N, possibly one of the best flash games ever made.

In creating the XBLA port, Metanet opted to self-fund the process through loans and grants, which are evidently quite plentiful in Canada (where the company is based). The final N+ product cost around $214,000 after outsourcing it to Slick Entertainment; without outsourcing, it would have cost about $125,000. Sheppard noted that the development situation forced them to constantly defer their own payments to themselves, which became problematic as the game became more and more delayed and Metanet’s money didn’t show up.

During the creation of N+, the original Metanet designers mostly worked in a mangerial sense; they tested the hell out of every build they got, and did their best to hammer home general design ideas. The Metanet team especially wanted N+ to include a more gradual learning curve; according to Sheppard, the original game actually had a horrendously steep learning slant, which needed to be adjusted in the port.

She went on to discuss the importance of marketing, of outsourcing into a collaborative partnership rather than hiring out to an indifferent mercenary group, and that, though there were bumps considering both Metanet and Slick were two small, inexperienced groups, things went more or less well.

At this point, Nick took over and described the step-by-step process of creating the N+ port. He divided his presentation into each month of the game’s yearlong development, each with his own personal suggestion as to what an indie developer should do during that month. In the interests of brevity, I’ll just highlight each of the monthly words of wisdom, along with a short explanation where necessary.

February – “Build a prototype in an ‘easy’ language”: c# gives you an easy way to look at the big picture

March – “Tackle your biggest problems first”: in N+‘s case, this came down to multiplayer, joystickcontrol, and localization.

May – “Build all tools in c#”: it’s fast and robust for building XBLA-specific stuff like matchmaking, leaderboards, achievements, and so on

July – “Get a build machine”

August – “Get your dialogs under control”: you wouldn’t expect ingame dialogs to be a big problem, but they definitely can be.

September – “render your fonts to bitmaps if you’re supporting Asian languages”: a Japanese font can take up 22mb alone. N+ had to be 10mb.

October – “Get a comfy chair in the middle of the office”: because you’re gonna be fighting bugs.

November – “Don’t plan a vacation right after certification”: because no matter how bug-free you think your game is, Microsoft’s certification process will show you it ain’t.

In the end, Waanders said N+ was challenging, but rewarding to be a part of. Looking back on Slick’s actions in porting it, he praised the already set-in-stone design ethos, the homebuilt tools, and the super-secret PAX playtesting. However, he regretting failing certification the first time, and the fact that they initially included far too many features and options than they needed or  could support. He also wished they’d had a few more programmers during the bug-fixing stage.