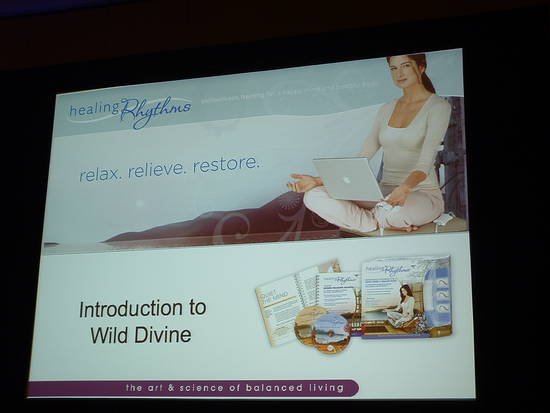 “The whole idea of not acting is completely counterintuitive to videogames,” Ian Bogost says. Indeed, he’s got a point: what percentage of gamers would actively seek out games whose purpose is not to excite, or titilate, but to relax? Games which are slow and, some would say, boring?

Ian Bogost, Tracy Fullerton, and a representative from Wild Divine presented three very different games, all centered around the idea of relaxation: Healing Rhythms, Guru Meditation, and The Night Journey. Each game approached the subject of relaxation or meditation from a totally different angle; Meditation Guru was an experiment, Healing Rhythms exists as a practical meditation teaching tool, and Night Journey functions as an esoteric metaphor for spiritual enlightenment.

Hit the jump for the lowdown on these three very unusual, very interesting games.

The Wild Divine representative went first, jumping right into what was essentially a gussied-up sales pitch for Healing Rhythms. Before getting to the actual game, she mentioned that the AMA blames stress for 80-85% of all human illness in the world; as her company had previously created a more entertaining, videogame-y meditation title (Journey to Wild Divine) which, despite grossing $3.5 million by its third year, could not escape its niche audience of new-age types and hippies, they decided to go for a more practical, accessible approach for their next game.

She hesitated to call Healing Rhythms a “meditation game,” because both those words have unfriendly connotations — meditation is something only hippies do, and games are for nerds. She preferred to speak of it as a relaxation experience and a stress management tool. She did, however, admit that it actually was a “meditation game;” only the actual vocabulary frightened her.

The game’s controller is its main hook. Three nubs are attached to the player’s fingers, each of which monitor heart rate and skin conductance level. Not unlike a lie detector, the game knows when the player is breathing too fast or becoming too excited about something; the player can view these sensory fluctuations by way of a realtime graph. 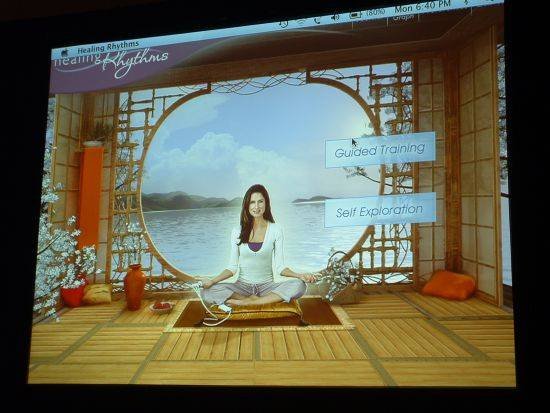 Healing Rhythms has fifteen levels (again preferring to stay away from nerd vernacular, the game refers to them as “steps”), each of which teach the player a new method of relaxation. The player is meant to first learn how to meditate, then understand more about their mind and what stresses them out while in meditation, then how to apply those learnings and meditative abilities to everyday life. Each level’s concept is taught to the player by one of any number of meditation gurus, including Deepak Chopra.  After learning whatever it is you’re supposed to learn, you put your meditative skills to the test in a practice level. In our demonstration, the representative showed us a relaxing-looking level with a tree in the background, which expanded and contracted at the rate the player was supposed to breathe at. If the player breathed at the specified rate, a stone staircase was supposed to slowly appear in the center of the screen as a reward.

I say “supposed to” because, after thirty seconds of really awkward silence, the representative completely failed to breathe at the correct rate and make the damn staircase appear. Still, she promised that 81% of Healing Rhythms’ users reported that it exceeded expectations, and that Good Samaritan Hospital reported an 81% decrease in pain amongst patients who used the game. All told, her pitch, while convincing at times, felt quite a bit like an extended advertisement for her product. Still, if her figures are true, then there’s a hell of a lot to be said for multimedia meditation lessons.

Next, Ian Bogost of Persuasive Games took the mic and matter-of-factly stated that Wild Divine’s first game, Journey to Wild Divine, didn’t work. It was actually “too beautiful” for Bogost, and the sensory pleasures the game offered prevented him from truly relaxing. 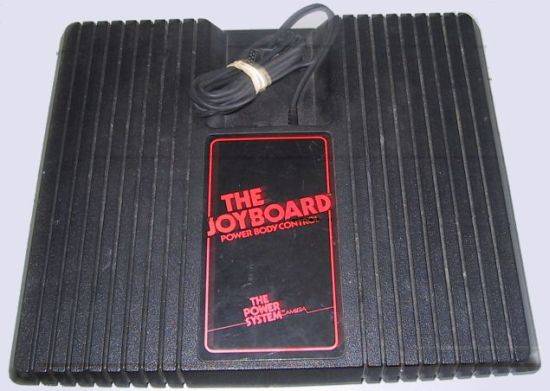 With this in mind, he created a protoype game called Guru Meditation for use with the Amiga joyboard (which he jokingly suggested was, in turn, ripped off by Nintendo’s Wii Fit board) where the player is instructed to simply sit on the joyboard and not move for as long as humanly possible.  He showed us about three seconds of the game on an emulator (“Some of my students played it for twenty, thirty minutes”) and then handed it over to Tracy Fullerton from USC.

Fullerton has been working on a game which you may or not already be familiar with: The Night Journey. Working alongside Bill Viola, renowned photographer and video artist, the two endeavored to replicate not a practical meditation tool like Healing Rhtyhms, but a highly symbolic journey of enlightenment through game mechanics.

But how to accomplish such a feat? First, Fullerton says, they needed to dramatically reduce player speed and graphical quality. In an average first-person videogame, characters move at roughly 40 miles an hour which, while useful for a high-octane FPS, ran counterintuitive to Fullerton’s ideas. In The Night Journey, the player moves just as slow as a regular human being does – the emphasis is on exploration, concentration and reflection rather than just rushing to the next locale.

Similarly, Fullerton added intentionally “ugly” graphics in order to add to the impressionistic nature of the game. Her plan is to “get away from everything the industry is trying to do with 3D graphics and just ruin it” and, as you can see in the above trailer, she seems to have achieved her goal.

In Night Journey, the player can “reflect” on particular objects in the environment with the press of a button. These reflections, Fullerton stated, change not only the physical environment but the properties of the player: reflecting on a tree, for instance, causes superimposed doves to fly across the screen as the tree itself becomes illuminated. After reflecting on enough aspects of the world, the player transcends his previous physical attributes: where he could only walk at the beginning of the game, the player eventually becomes able to glide, then fly.

Fullerton also wished to challenge preconceptions of loss and losing. In most games, losing is a binary idea; you’ve either lost, or you haven’t. You’re either alive, or dead. In Night Journey, Fullerton instead opted to make death a frequent, inescapable process of the game (symbolizing the cycle of death and rebirth). The game starts at twilight, and ends at night; constant reflection can put off the darkness, but sooner or later the player will always die. Upon night falling, the player experiences procedurally-generated dreams culled from which objects the player has reflected on.

By using traditional game mechanics (a nonlinear world, a first-person perspective, death) with a deliberately paced, deeply spiritual theme, Fullerton hoped to bring gamers and non-gamers together with The Night Journey, which she plans as an installation piece for museums or art galleries.

Overall, I heard three very different approaches to meditative gaming, all of them interesting in their own ways; I didn’t give much credence to the idea of subtle, slow, relaxing games before tonight, but now I’m pretty damned interested in them.