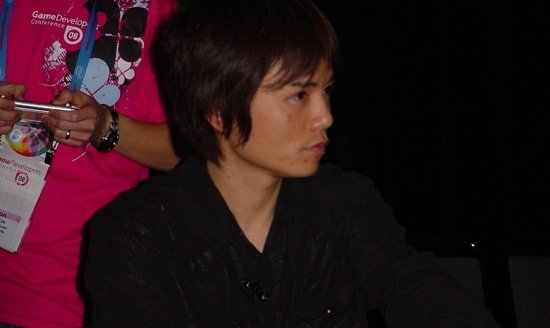 I don’t think that the buzz surrounding Super Smash Bros. Brawl could be any more intense — at least, not as evidenced by the colossal line outside of hall 135 in the Moscone Center this morning, packed with ravenous journalists, developers, and everymen waiting to hear Masahiro Sakurai speak on the development of his latest title.

How does one go about creating a game like Brawl? How were characters selected, updates developed? Sakurai put his project under the microscope and dissected the development of Brawl as we know it today.

GDC staffers advised attendees to limit flash photography to a minimum as we piled into the hall, but it didn’t really stop anybody. A flashmob of paparazzi-esque fans snapped the crap out of Masahiro Sakurai while he prepared for his lecture — with a smile, Sakurai pulled out his own camera and took a few shots of the crowd.

Sakurai introduced himself as a freelance game designer, and explained that his company — Sora, Ltd. — is just two people, himself and his assistant. The presentation described the collection of a development team for Brawl as a “group structured like a mercenary horde” — developers roped in from everywhere, freelancers and part-timers, Game Arts and even a few folks from his old haunt, HAL Laboratories. In all, 100 people worked on Brawl.

Speaking on the development of the character roster,  Sakurai said that most of the characters were settled upon in the planning stages, which was completed about two years ago. But Sonic was the exception to this process.

“The decision to include Sonic was not made until 2007,” Sakurai noted.

In terms of his criteria for characters to be included in the game, Sakurai said that to merit inclusion, characters had to stand out, and do something that only that character can do. Additionally, new additions to the roster had to improve the balance of series representation — you don’t want half of the roster from the Mario series, or Zelda. The developer put an additional emphasis on individuality. “Clarifying the concept early on of what a character can do was very important,” he said.

Sakurai discussed Brawl’s visual style, and noted that in every Smash Bros. title to date, there was an issue of making the characters look appropriate next to one another, and trying to find ways to scale them in such a way that it made sense. The size and shape of Lucas versus the Pokemon Trainer, for example, illustrates that disparity; Lucas is shorter, but his head makes up some 30% of his total height.

Additionally, Sakurai wanted to bring an enhanced level of detail to previously established character models to unify design across the roster. He compared Nintendo’s standard model of Mario — a cartoony, bright, colorful 3D rendering that we’re all familiar with — with his portrayal in Brawl, which has a much deeper level of detail. All the characters had to feel the same, even if they were radically different in fundamental design — for that reason, detailing characters was crucial.

“If you had Bugs Bunny fighting a photorealistic character,” Sakurai noted, “the result would be awkward.”

In updating Pit from Kid Icarus for the new title, the developers were hung up on an interesting question. Sakurai put up two slides — Pit as he was portrayed in the original Kid Icarus artwork, and his new Brawl incarnation. “He’s seen no design changes for about 20 years,” Sakurai said. “So our planning was based on the question we posed to ourselves: What if we modernized him in a single leap?”

As an example, Sakurai noted that throughout the many games in the Zelda series, Link gained earrings, got older and younger, and received more detail for his sword and shield. Pit had no such series, but Sakurai and his team tried to imagine that he had — and based on that imaginary evolution, the additions and evolutions to the Pit character were made.

“We felt that making the character stand out was job number one. If a concept is well thought out and solid from top to bottom, both the creator and the audience will accept it. We wanted to stay true to the core essence of the character,” Sakurai said.

He went on to discuss animation, and the difficulty in conveying his original ideas as to how characters ought to move and pose during different phases of an animation to the team. Explaining through gesture and writing it down wasn’t going to get it across as well as simply showing the team. So Sakurai employed Microman action figures — highly articulated action figures sold in Japan — to make the exact pose, photographed them, and sent them to his staff. He showed the audience several slides with the pictures, juxtaposed with the final in-game result, first with Wario, and later with several other characters.

Sakurai closed his lecture with a short mention of the Smash Dojo, cited as a means of generating buzz and getting the word out. Sakurai revealed that at its peak, the Dojo got more than five million hits in a single week, and over one million hits in a single day. Maintaining the website had been a time consuming process — “Dojo Update Hell,” Sakurai called it — but it was necessary. Though much of Brawl‘s following was built in, expanding that reach with daily updates and getting people excited about the product was a key aim of the Dojo.

And thus ended Sakurai’s lecture. Brawl drops on March 9, which bizarrely seems to be farther away the closer it gets. Screw it, I’m going back to the expo floor!