Remember that cool game I hinted about last week that I was really excited about revealing once the embargo lifted today? Well, thanks to some spoilers that I refuse to link to out of anger (argh!), the grand reveal has already been ruined. Can you all do me a favor and just pretend you haven’t already heard about this game just to make me feel better? A “Wow, this is breaking news!” or “OMG! This is the first time I have heard this amazing information!” would be greatly appreciated.

Last week at GDC, , Dale North, and I were surprised to see a very early demo of the sequel to Puzzle Quest being shown at a meeting with D3 producers and designers.

While the existence of the game didn’t necessarily shock us, the drastic change in aesthetics certainly did. Instead of a simple sequel set in the same Final Fantasy-inspired world, Puzzle Quest: Galactrix takes place in the future … in space … with a completely overhauled puzzle board … and spaceships … and a diplomacy system … and gravity mechanics. Basically, it is a brand new game. And I couldn’t be more excited.

Hit the jump for my impressions of the admittedly short demo. Does the same addictive gameplay still hold up, or did the numerous amounts of changes ruin the overall experience?

Come on, admit it: you were all like me and expected a sequel to Puzzle Quest to have the exact same graphics, new (but similar) characters, and maybe a few additional tile colors to add some variety. I know for a fact that is what Nick, Dale, and I were expecting.

Not that there would have been anything wrong with that. I love Puzzle Quest so much that I probably would have bought it regardless of the lack of evolution.

What makes Puzzle Quest: Galactrix so great, though, goes beyond its exciting and surprising new setting. Fighting in giant spaceships is amazing, of course, but the game also offers a ton of new features and gameplay. 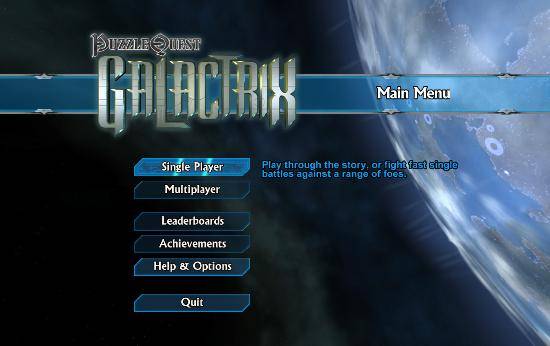 Most significantly, the board is now a new shape. Instead of the traditional “well” offered in most puzzle games like Tetris Attack or Meteos, Puzzle Quest: Galactrix utilizes a board that is circular.

I have to admit, when I first saw this shape I didn’t really understand the way it would work and got a little scared. One of the most addictive things about the original Puzzle Quest is removing a chain of tiles and watching everything fall down, creating devastating combo after devastating combo. The experience was endlessly satisfying. Looking at the new shaped board, I was worried the cascading blocks would be taken out completely.

The good news: I was most definitely wrong.

Since Puzzle Quest: Galactrix takes place in space, gravity becomes part of the gameplay. Say you switch a colored tile with a piece that is directly below it. In that scenario, everything will fall straight down, just like in the original game. But if you switch pieces that are side by side, the new pieces will cascade in from whatever angle you switched your pieces. If you “move” to the left, so do the refresh tiles. I know that sounds a little confusing, but it really isn’t. If anything, it exponentially adds a layer of challenge in that you have to be watching not only the entire board, but every angle in which colors can be matched.

Besides this shocking new gravity mechanic, it also seems the designers are keen on taking the story a little more seriously this time around. In the first Puzzle Quest — while having anything resembling a story was refreshing — all the characters and plot “twists” felt more like means to an end, added to just give the player an excuse to engage in the addictive puzzle battles. 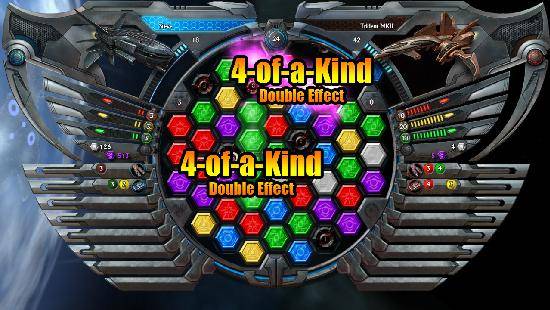 In Puzzle Quest: Galactrix, a huge epic space odyssey is going to be told. While the game is only 20% complete, the D3 producer on hand to show off the demo assured us that the final product would feature complete character/starship customization and even a diplomacy system, a way to form complex relationships with the many alien races featured in the game. Even in this early stage, Galactrix seems to be expanding its focus far behind the puzzle stages.

Some of you may be worried that all of these changes are going to amount to a game that is too complicated for its own good. While I may have agreed with you after reading about this on paper, seeing everything in action made me realize everything is going to just fine. Returning are the red, green, and yellow resources you can collect to activate special moves, with bonus blue, white, and purple tiles also available to boost your shield strength, intel, and psi power, respectively. Although they look and act differently, the same comfort food concept remains and feels as familiar as ever. Leveling up your character and attributes should feel just as engaging come the final version.

While it wasn’t shown, the massive overworld map is set to make a return, this time larger and more detailed than ever. Not surprisingly, the game will find your character traveling to many different planets spanning several gigantic galaxies. When you throw in the fact that each planet and galaxy will offer different levels of gravity and environmental hazards, you really start to realize what a deep puzzle game Galactrix is growing into.

It may not get the same kind of media attention as something like Gears of War 2, but I am just as excited (if not more so) for Puzzle Quest: Galactrix. It seems the designers kept everything that was addictive about the original game (leveling up, executing special powers, etc.) and improved upon the stuff that didn’t necessarily work (generic look, barely passable story). So far the game is planned for release on the Nintendo DS, PC, and XBLA (sorry PSP fans) sometime in 2008. I don’t know about you, but I can’t wait.