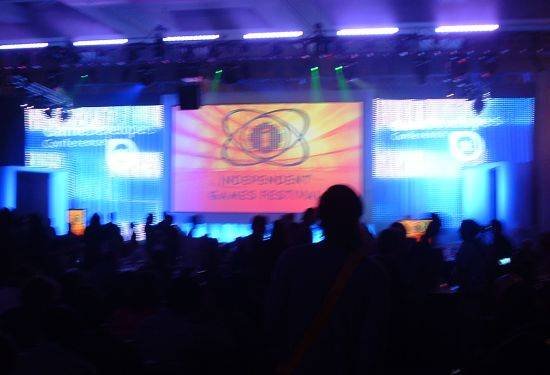 I love indie games. So much.

So, I went to the Independent Games Festival.

So, I enjoyed myself.

So, I decided to talk about my impressions of the event and post the winners.

So hit the jump for the winners and said impressions.

The actual award winning games taught me two things: firstly, that I need to play Fez, World of Goo and Crayon Physics Deluxe as soon as is humanly possible (preferrably with Chad in tow, so he can freak out the moment we geat near the Fez booth). Secondly, not a single nominated game wasn’t bringing something totally original or interesting or simply independent to the showcase. I had an gaming-induced boner throughout the entire show, and I make no apologies for it.

The award show, while the tenth altogether, was the first to be recorded for broadcast on G4.

It was also, incidentally, one of the weirdest award shows I’d ever been to.

The fellow who presented all the awards seemed like one of those guys who was told they were charming years and years ago by a really attractive member of the opposite sex, and they took the comment to heart with such gusto that they refuse to put any effort into being clever, funny, or actually charming. You may think I’m being harsh, but we’re talking about a guy who did an impersonation of Ben “Yahtzee” Croshaw for cheap laughs…while Ben “Yahtzee” Croshaw was in the motherfucking room.

The award winners conducted themselves with the grace, dignity, and quiet stoicism which you’d expect from a group of artistic personalities who are pushing a medium forward in completely new and innovative ways.

Nah, I’m just fuckin’ with you — the ones who didn’t give their acceptance speeches in haiku form while wearing plastic monocles exhibited an adorable, quasi-crippling awkwardness. Their shy awkwardness wasn’t necessarily unusual — geniuses tend to be an eccentric bunch, after all — but I have to assume it’ll make for some pretty surreal television if and when it’s eventually broadcast.

The show was punctuated by occasional videos from Mega64, all of them hilarious. The first initially appeared to be a good-natured intro video from Dan Paladin, until it suddenly turned into an incredibly loud metal song which made death threats toward members of the audience who hadn’t yet played Fez. The second video drew tremendous laughs as the Mega64 crew defined what it meant to be “indie,” while bragging about how indie they personally were (“I’m so indie, I don’t know what Halo is.”). The last video concerned how to deliver your acceptance speech, and though I didn’t get a chance to see it, I assume it was hilarious.

All in all, the IGF was a fun, if paralyzingly awkward way to cap off this Wednesday.

EDIT: The “Gleemie” award was sponsor Wizard of the Coast’s way of highlighting what they thought was the best strategic game in the festival, whilst hawking their new game distribution system. Also, links are fixed.