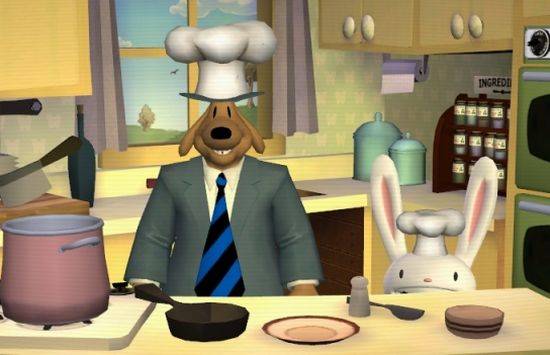 Telltale Games has single-handedly proven that the episodic games model can work. The Sam and Max episodes have been consistently released on time, they’ve been hilarious and fun, and they’ve served as a great success for both Telltale and the distribution format they essentially created.

All that in mind, I sat down to interview Kevin Bruner, CTO of Telltale, about Sam and Max and the episodic model in general.

Never, ever, ever leave your digital audio recorder in your backpack with the batteries in. You may think it’s off, but at some point the contents of your pack will shift around and turn it on and when you take it out to record the interivew you’re about to have with Kevin Bruner then all the batteries will be dead and you’ll look like a jackass.

You’ll also have to vaguely summarize Bruner’s answers rather than formatting your post like a normal interview article. I apologize.

How the hell do you guys do it? You’ve released every single Sam and Max episode on time, every month, each lasting about four hours. How is that even humanly possible?

Bruner basically said that since Telltale was created 4 years ago with the express intent of solely creating episodic games, they had a very strong, definite goal. The episodic model is a very deliberate, very difficult one to do, but they learn more with each new episode. He went on to say that, though the episodes release monthly, it actually takes about 3/4 months to complete each one — the six month break between seasons isn’t for rest, it’s to make new episodes.

Every two weeks, someone laments the death of the adventure game. Are the Sam and Max episodes reviving the genre, or has it never been dead?

He’d been asked variations of this question since the days of working on Grim Fandango, and it never ceases to be any less silly. Adventure games are always dead; it’s the oldest genre in gaming, but, despite however many people may think it’s dead at the time, it always survives. We love story games, so they stick around — if you wanna talk about a dead genre, think about how many arena fighters you’ve seen in the last few years.

Can you give us any hints about the two new episodic franchises you’ll be announcing in the near future?

The’re big franchises, even bigger than Sam and Max. One will be on WiiWare. It’s been great to start with relatively small licenses like Bone, then move up to Max, then to these two new ones.

Any chance of a Full Throttle series?

Bruner still talks with LucasArts quasi-frequently, and they’d definitely be open to a FT game, but there aren’t any plans for it yet. The two new licenses aren’t LucasArts-related.

The latest Sam and Max episode seemed to end on a big cliffhanger which will tie into the next episode. This is the first time the series has ever attempted anything like this: why now?

It’s something they always wanted to do, but didn’t in the first season as that was more of a litmus test as far as how gamers were going to react to a truly episodic game. Would they play the episodes out of order just because they could, or would they play them sequentially like a TV show? As it turns out, gamers do usually play them sequentially, which means the team is more free to try more TV-specific episode formats, like two-parters or Christmas specials or “a very special Sam and Max,” or what have you.

What do you think about how Valve has handled their Half-Life 2 episodes?

They aren’t really episodes, by Telltale’s definition of the word. They don’t come out reliably, and there’s too long of a gap between episodes. Yet, this is somewhat understandable: Telltale can release reliably because it was formed for that exact purpose, but they’d probably have a heck of a lot of trouble creating new platforming or shooting episodes every month, just as Valve might struggle with making new adventure titles every month. Bruner did note, however, that episodic gaming is not something to dabble with — you go full-on, or prepare for delays and problems.

What did you learn from Season One that you’ve added to Season Two?

The hint system, mainly. In Season One you had to ask Max for help, which made players feel stupid — and nobody wants to admit they’re stupid. Instead, Max now tells you the hints based on how stuck you are and what hint level you’ve set the game at, making the whole game world much more proactive. The world doesn’t just sit around waiting to be poked; it comes to you.

Why only five episodes in Season Two, versus Season One‘s six?

Telltale found they could tell the story adequately in five episodes, and compensated for the lack of a sixth by making the other five much meatier. The refinement wasn’t a reaction to the market, just a refinement of the formula.

Sam and Max gets progressively weirder and awesome as it goes on — Max becomes president, then you fight emo zombies, etc. How do you manage to keep building on what you’ve previously done?

That’s what Steve Purcell is for. Everytime the Telltale writers think they’ve reached the limit of ridiculousness, Steve comes in and reminds everyone that they aren’t even close to the limit.

Is it more spiritually fulfilling to create episodic content than a huge, long-term game project?

Absolutely, Bruner says. On older projects, he was involved from concept to the very final release, and a single game could often take four years to complete, which tends to wear on a man. Making two to three games in a decade seems really unappealing, especially considering Telltale has managed to create 24 separate gameplay episodes in only four years. It simply makes you feel more alive.

Are there any other franchises you’d like to see go episodic?

Definitely. He “cringes” at other franchises: why does Simpsons Road Rage exist? That has nothing to do with the show. When studios create large, singular licensed games, the media machine feels obligated to turn it into something constantly titilating and bombastic and ultimately dishonest to the soul of the franchise. Everytime Bruner plays a Bond game, he has to quit halfway through because it basically turns into Quake with a British protagonist, which isn’t what the movies or original novels were about. An episodic format could alleviate some of those problems, which is why Telltale currently makes nothing but licensed games.

The Telltale team half-jokingly always suggests that they could make a really incredible West Wing episodic game. A game could work like that in the episodic format, but only in the episodic format. There’s a much lower risk involved in creating an episodic game series; something like a new Sam and Max game migh tnot necessarily work if released exclusively as a singular retail product. If you start an episodic series and it doesn’t work out, you can always pull the plug without losing too much money. You can’t do that through retail, which, again, is why so many licensed titles suck in their attempt to appeal to as many people as possible with really dishonest action content.

Thanks for your time.