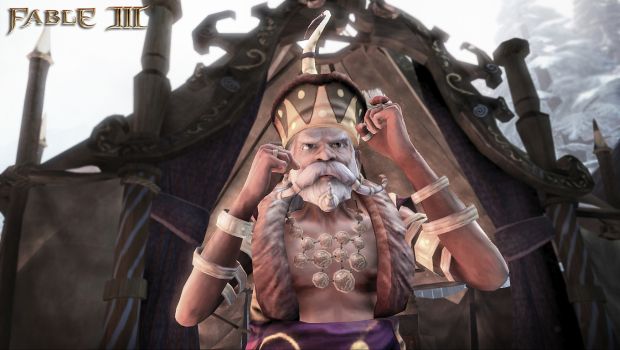 Fable III is upon us in two months and Peter Molyneux had 20 minutes to talk about what he thought should take at least three hours. He wanted to talk to us about the story, the mechanics and some of the evolutions from Fable II.

By now you know that as the son of the protagonist in Fable II, you start as a rebel who needs to build up followers to start a rebellion that results in you becoming the king. Molyneux drew half of a graph that showed what he called Act 1. The other half of the graph was about you being king in Act 2. He thought that games and movies tend to have formulaic stories where the hero starts out very weak and ends up with more power.

Becoming king and having to deal with the aftermath of what is normally the endgame scenario is his way of playing around with avoiding that formula.

In the demo I saw, the player had to infiltrate a renegade camp. He needed a disguise to pass as a mercenary in order to do so. To that end, you had to go to the Sanctuary, a hub that was created for you by your father. The Sanctuary can be called up by what Molyneux called an “innovation to the start button.”

Normally the start button just summons a 2D menu with options, or things like armory options. In Fable III, you still have the same functionality in the form of an armory and a dressing room which provides a visual representation of those traditionally 2D menus. It also has a butler voiced by John Cleese. He provides some humor and comments on whatever you choose in the armory or the dressing room. In this case, selecting the Mercenary Outfit elicited a comment about how that outfit is great for acting like a mercenary. Truly invaluable feedback. Good thing it’s John Cleese who says it.

Fable III lets you craft your own unique weapon by not only choosing your own preferred design but also by the way you play the game. If you mash the attack button all the time, your weapon will evolve differently than when you use charge attacks, block a lot or when you time your attacks. Molyneux hates the idea that in the end game your weapon would be worth less than the most expensive weapon you can buy. It should be worth more! You can swap weapons and magic on the fly in combat, which also affects the way your weapons evolve. Although no concrete details were given about exactly how this weapon evolution process works, you should get the general idea.

Storywise, it should be better than Fable and Fable II since Molyneux thinks those games lacked story. Becoming king is all about making promises in order to gain the needed support. But when you are king, the way you handle those promises will result in different situations. There was something spoiler-ish things he couldn’t talk about to that effect, but he gave me a “pffff” face when I asked him if it was something that would carry over to Fable IV.

Finally, being king won’t be any type of god sim or anything. It will still feel like Fable so it will involve you running around and killing things when you are not screwing with spouses or manhandling your offspring.