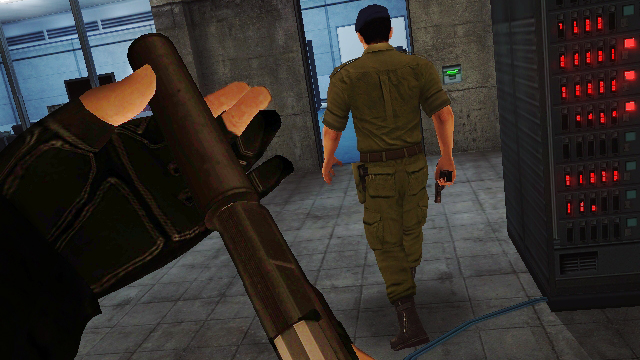 It’s been thirteen years since one of the most celebrated console shooters, GoldenEye 007, was released on the Nintendo 64. Since then, we have had a sub-par, sort-of sequel in GoldenEye: Rogue Agent and people arguing about whether the original’s gameplay still holds up or if it even deserves the status it has gained. Now, developer Eurocom has stepped up to attempt a re-imagining of both the plot of the film and the 1997 game.

Will it get people all shaken and stirred?

There is a serious sense of deja vu about GoldenEye 2010, despite Eurocom saying that it couldn’t simply remake Rare’s original for legal reasons. The level that we were shown was the Jungle level which, just like it’s 1997 counterpart, sits around 75% of the way through the game (and apparently features a battle with Xenia Onatopp, although we didn’t get to see that) and sees Bond being shot down by a heat-seeking rocket and crashing into the dense green jungle below.

The whole section is designed to be played in a stealthy manner with your using takedowns and gadgets to work your way through the level. Approaching an unaware enemy from behind will give you an on-screen prompt to press a button and execute a choke out or neck snap. It is nothing new but works perfectly well and is something more elaborate than simply melee attacking the back of the enemy’s head. Enemies further away will need to be taken down using you silenced PPK, but screw this up and you’ll make your target aware of your presence. In those circumstances, you will have a brief window of a few seconds in order to take him out before he alerts other guards in the area or starts shooting you.

Not everything that is out to kill you is so easily disposed of — the Jungle is lined with automated machine guns that sweep the area with blue lasers that will rip you apart if you stumble into them. Bond, being the super spy that he is, comes fully prepared with gadgets such as, in this case, a mobile phone that can be used to hack the turrets and turn them against enemy soldiers. If you wish, you can also simply attack the laptops that are running the turrets to disable them.

To be honest, I’m sure by now you have realized that I’m writing about the section of the single player that I got to see without any enthusiasm, and I do apologize for this. It just feels wrong, like Eurocom is afraid that if it moves too far away from everything that GoldenEye 1997 was then people’s enthusiasm for the game will get hurt. So what we have is a deja vu-inducing experience containing many elements of the original with some added gameplay mechanics that feel a bit weak and almost detached from the main game. It’s like coming home from work and finding someone else wearing your wife’s clothes, pretending to be her. And it’s a man.

My reservations, however, do not extend to the multiplayer that, for all of the additions like iron sights, recharging health, and the ability to jump and run, feels as much fun as its original counterpart. We played a session of four-player, split-screen deathmatch, and the relatively small design of the levels, along with a radar in the corner that displays the whereabouts of your opponents at all times, makes for a fun, frantic multiplayer experience. Regenerative health doesn’t leave as much of a mark as you’d imagine, given that you really only have a small amount of health to begin with so that any prolonged attack will result in death. The game has also been designed to be played with the Classic controller, Wiimote and Nunchuck, Zapper, and GameCube controller, ensuring that however you feel most comfortable, you’ll be catered for. We played with the Classic controller and it seemed nice and responsive.

So the multiplayer is a great deal of fun, and I have no doubt in my mind that people will have an absolute blast with it. However, my issues with the single-player campaign still remain troubling. It doesn’t seem different enough from 1997 original to be anything worth paying attention to, and what little it does that is new isn’t really that exceptional. There is still time until the game is released, so it is possible that improvements can be and hopefully are being made.