Knights Contract is the upcoming Namco Bandai action hack-and-slash. The game, which is about 60% done now, is set in medieval Germany during the witch hunt era. Knights Contract — not “Knight’s Contract” — tells the story of the executioner Heinrich who gets trapped under an immortality spell by the resurrected witch Gretchen, one of Heinrich’s victims.

Heinrich’s immortality means that he cannot die from direct damage. Gretchen can, however, so your health bar is Gretchen’s while you control Heinrich, leading to some interesting gameplay mechanics. Heinrich is primarily a melee character while Gretchen is a support character who uses Witchcraft, what magic is referred to in Knights Contract. 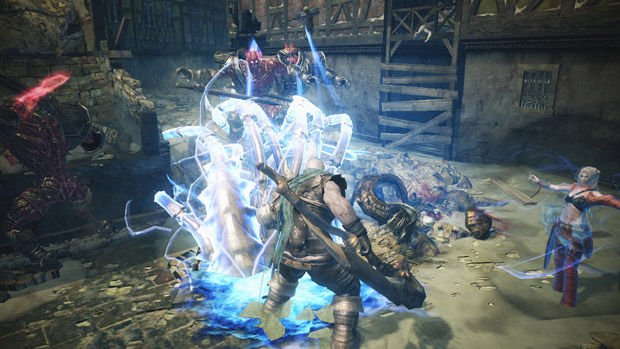 Producer Ryo Mito from Namco Bandai showed us a demo of a rough build where Heinrich and Gretchen travel and fight through the alleys of a medieval German town. As they dispatched some typically crazy-looking enemies, we got some idea about the combat. Basically, just think Devil May Cry meets Ico but not quite. You can do specific combos by combining melee attacks and Witchcraft spells, a range of which you can assign to buttons. Witchcraft also plays a large role in boss fights, because what kind of Japanese action game with hacking and slashing wouldn’t have ridiculous bosses?

One of these bosses is a giant hybrid of a fiery horse with a chariot. What? Yeah, imagine a horse where the back legs are wheels and parts of a chariot is part of the horse. Another one is a big dragon hound thing with a large rectangular kind of split mouth lined with teeth. I guess translating crazy Japanese monster designs into text doesn’t really work.

The last boss fight is set in the town square lined with high houses. The problem with fighting this boss is that it keeps jumping on top of the houses, destroying the scenery and the roofs in the process. While you can evade the projectile attacks when the boss is up above and run away when the boss is jumping down on top of you, you don’t have a lot of time to do proper damage when he is grounded. That is where Witchcraft comes in.

After using some entangle Witchcraft that binds the boss to the ground with magical chains, Heinrich is then able to slap the hell out of the boss by means of a sharp, pointy broadsword. After doing enough damage, you can finish the boss by means of Witchcraft and watch a nice animation as it’s dismembered into a visceral mess of bloody bits. 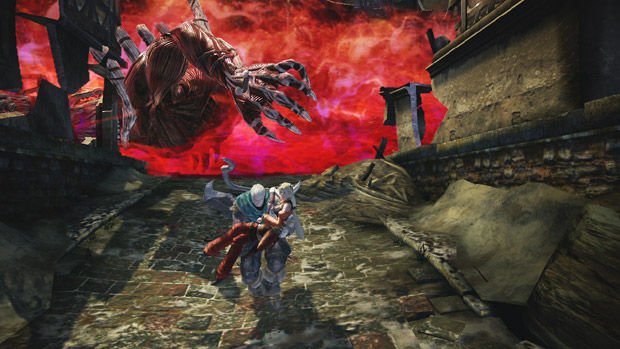 Besides running around killing enemies, you have to remember to protect Gretchen as your health is tied to her. Heinrich can pick up Gretchen in her arms to protect her but this will slow him down. If he drops her, she does tend to run straight back to him to support him, which might lead to some frustrating situations where you try to put her out of harm’s way only to run straight back into danger.

Overall, the game did look like a pretty fun action game during a drought of its type. I think we’ll have to see for ourselves how the gameplay really works when we have the controller in our own hands. Knights Contract might just satisfy our genre need in a time where there’s a potential lack of competition.