Hunted: The Demon’s Forge has been called “Gears of Warcraft” in some publications. Whether that is entirely fair, or what you should expect from this co-op oriented action game, is what you are clicking below the jump for — to read our hands-on impressions!

So what is Hunted: The Demon’s Forge? At its heart, it is a third-person hack-and-slash game where you walk around and hack and slash things. Amazing, I know! The thing that makes Hunted different from what you’re used to is co-op. You play one of two characters — a female ranged one, or a bulky male melee one.

I started the hands-on as the female, while a developer was playing the male and guiding me through it. Everything felt pretty familiar, so it was really easy to run around, use LT to aim in Gears of War style and RT to shoot arrows. Many skeletons were dispatched with arrows, because arrows are a skeleton’s bane! Just kidding — you can also use magic or swap your physical weapons from bow to shield and sword. You use A to run, you can snap to cover, and the level did look a bit gray for story reasons, so I guess you can’t blame anyone for the “Gears of Warcraft” nickname. 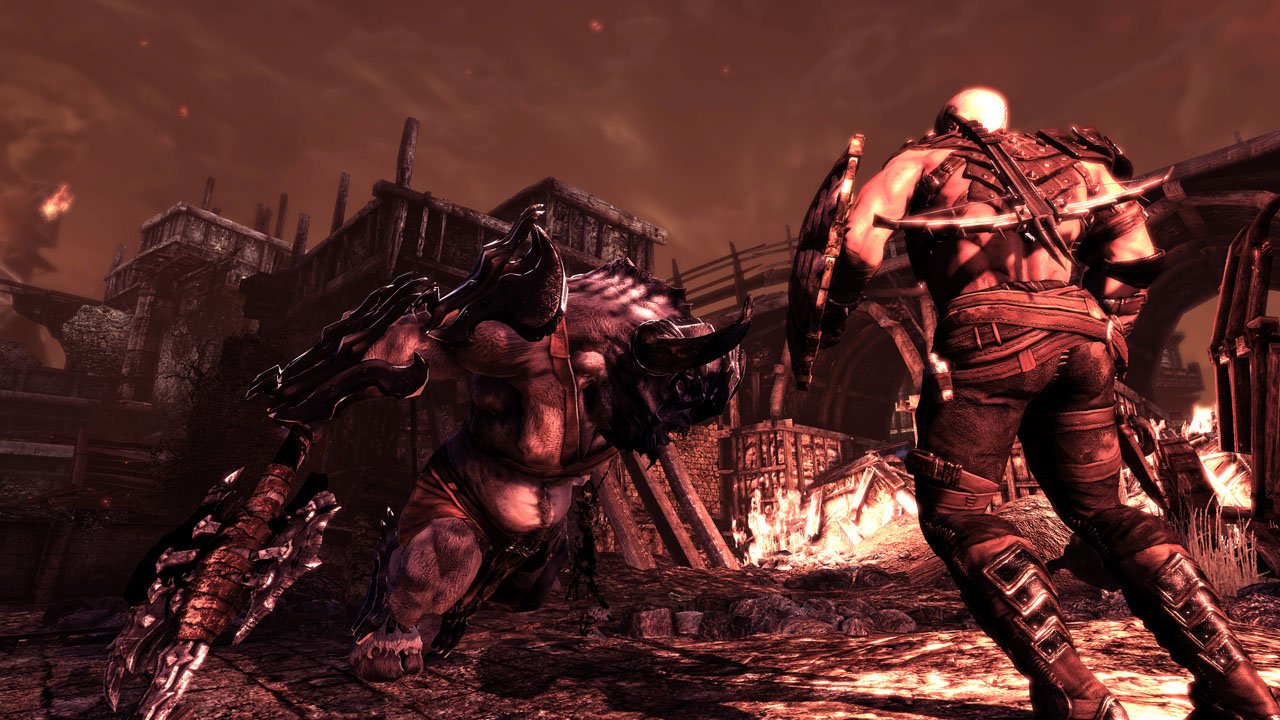 Still, that doesn’t really do the game any justice. While the controls and point of view were familiar, that only helped me to get into the action straight away. What was more important was the co-op design. If you play single-player, you have an AI companion. But playing with another person adds more than just the human element. For instance, you can use the ranged character to cover from a high angle while the melee character does his thing. Or the melee character can block a staircase while the ranged character runs upstairs to pick up some loot.

While you can choose to not care about coordinating, the hands-on showed me that if you do that, you can get overwhelmed and die. There were quite a few moments where we talked about the game’s specifics and ended up not looking at the screen and dying. Kind of similar to Brink, if you are incapacitated the other person can revive you. It costs you a revive potion, but you can revive your partner from anywhere, as long as you point at him or her and press a button. If you ever do get into a tough fight, you can also use magic on your partner to infuse them with the elemental magic (lightning or fire in the hands-on) and have them dash out damage like a U.S. short seller does to an economy.

After some early fights, an enemy took control of a ballista and started to shoot at cover in an open area. Cover where I was just chilling. The cover just got obliterated with my lovely female form. I would enter a sad smiley there if I could, but I was actually pleasantly surprised. Thankfully I was revived, and after some headshots to the ballista guy, the ballista was ours. My melee partner defended the only entrance to the ballista, and I was allowed to blast a ton of skeletons to bone dust. It took me a while to notice there was actually no end to these skeletons until I destroyed two pillars that spawned them. 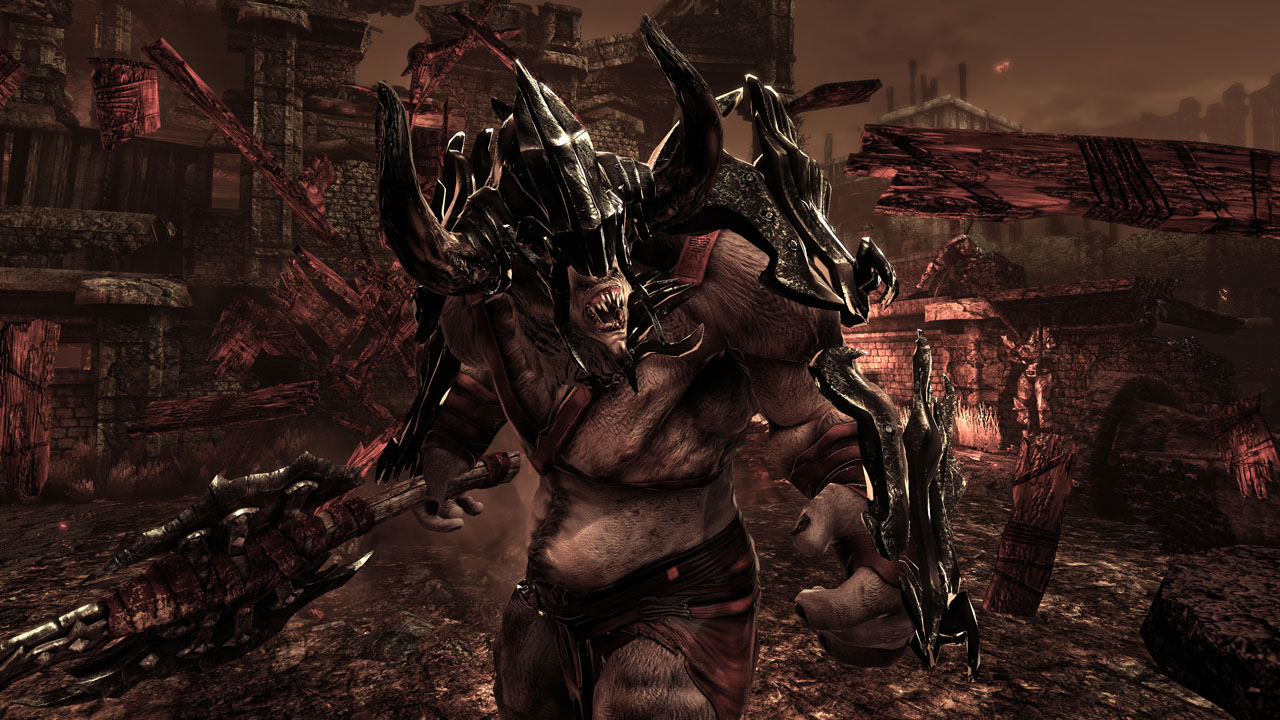 As we continued, we got to a waypoint where you can switch characters to mix up the gameplay. As the melee character, instead of shooting a ton of arrows, you run around and hit things with your sword. Or use your shield to bash things with a short boost attack. One thing I noticed was that the sword I had was really slow to wield, but it killed enemies proper. In the full game, you will have light and heavy weapons which will be faster but less powerful or slower but harder hitting. After more killing, we got to a cutscene that I skipped on autopilot and the demo ended.

Hunted: The Demon’s Forge looked like it still needed a bit of polishing on a couple of things, such as having a lack of an indicator for where you partner was. But it’s still a while until release after all. Mostly, I quite enjoyed playing it. It wasn’t very deep or heavy handed, but it satisfied my need for killing a literal ton of things. I do love the Dynasty Warriors games, and this felt like a much more focused and, well, better game than those. 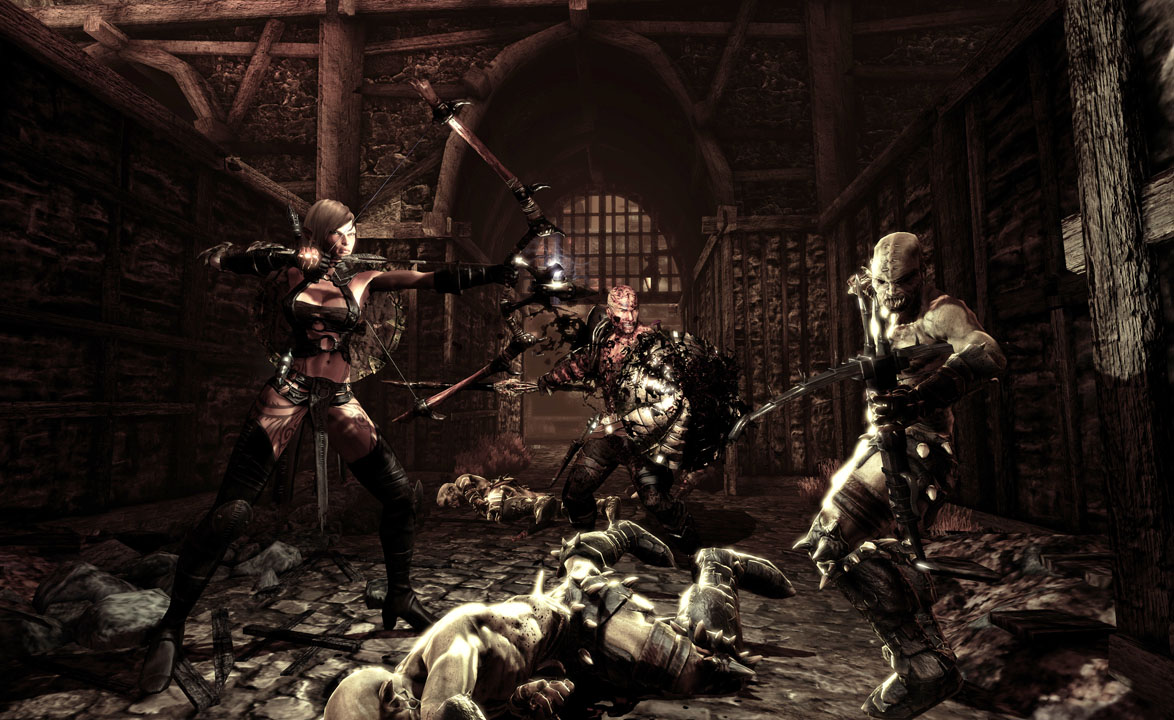 The developer talked about how he loved to play old text adventures 25 years ago, because you would have a lot of hidden content in the form of side quests or dungeons that are off the beaten path. While that path seems linear in Hunted and you have a Fable 2 style indicator stream that flows from your character, Hunted will have a huge amount of hidden content if you take the time to explore. Hopefully inXile Entertainment (who also released the pretty enjoyable The Bard’s Tale “remake” in 2004) will provide enough hints to players so they won’t miss all that content. There will be plenty of hints throughout the game and a journal that collects all of them, so that will just depend on how much a hack & slash lover cares about exploration. Then again, it means more hacking & slashing!

Oh yeah, and you can execute some enemies if they are near death. Which in my case was death by penile sword impalement. And can anyone really argue against that?

Hunted: The Demon’s Forge is scheduled for 2011.