Brian Jarrard, Bungie community manager and executive producer of the Halo comics, showed me Halo: Reach this morning. As Halo: Reach is Bungie’s last Halo game, they want this to be the very best Halo game it can be.

After three games, we already knew that teh Master Chief is a pretty cool guy who doesn’t afraid of anything, so it’s nice that Noble Team will be the headliners for this one. 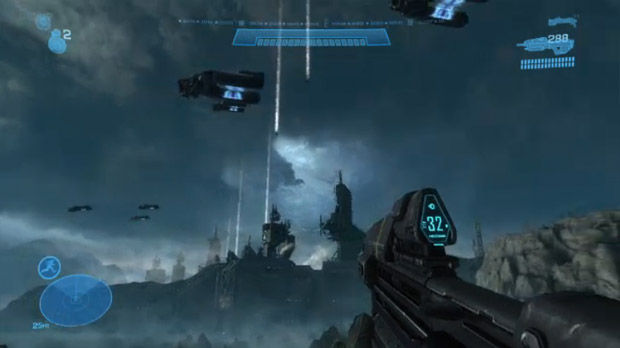 The demo started with a video mission brief for a mass-scale ground and air assault on a Covenant battle group. Watching the assault in action looked nice, as large amounts of military hardware steaming off to battle tends to do.

It looked like the engine definitely got an upgrade as the amount of vehicles and things onscreen are a lot higher than in Halo 3. That game didn’t look that great to start with, but Reach should be able to compete with most upcoming shooters on the good-graphics-with-stable-framerate department this season. There is also a lot more in-game cinematic action going on, but more about that in a bit.

After crashing your Warthog when it tried to cross a bridge that got hit by the Covenant, you get a first person CoD-style bit where you slowly get up again as your blurry vision refocuses. Being in an ongoing battle, you immediately get hit hard by a lot of enemies while you and your teammates try to regain control and momentum. Pushing forward, the pacing moved to the Halo you all know by now: three to eight enemies at a time depending on how strong they were, followed by some walking forward, followed by another three to eight enemies.

After about a few minutes of the trademark Halo gameplay, you got into a new vehicle: the Missile Hog. It is a Warthog with mounted double missile pods. The missiles looked like they were fast but not super accurate and had a bit of a chaotic firing arc. The AI also shot close to the Missile Hog a couple of times, although it didn’t look like it did any friendly fire damage. 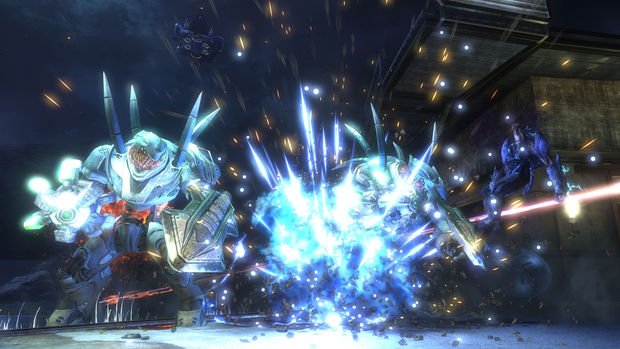 While driving the Missile Hog up a hill to an enemy AA tower that was the primary objective, the action moved to a crescendo as more and more Covenant were blasted to bits. Reaching the hilltop just outside the AA tower area, you could see the ongoing battle in the distance. Three Scarabs were duking it out with the UNSC battle group of Scorpions and other units. Those three Scarabs were just sitting there though, destroying the UNSC.

Hopping out and storming the AA tower, you melee the shield generator’s shield and throw in a grenade. After running outside, you could see the tower explode that allowed two frigates dropped down from the upper atmosphere. Just in time too, as a Covenant dropship tried to land by you. It stood no chance as a barrage of fire from the frigates rained down upon the unprotected dropship. A bomber wing flew overhead towards the plains where the ground battle was being fought and bombed the three Scarabs to bits.

After the demo, Brian Jarrard offered some more information about the menu, Firefight and customization options. Apparently 2.7 million beta players offered enough data to polish the multiplayer aspect, which was not discussed in detail.

Firefight is expanded a lot from ODST and Jarrard showed some of the customization options. He went through it way too fast to catch everything in the menu, but some of the options included modifiers for damage resistance, player speed, gravity strength and up to five loadouts. You can share your personal Firefight customizations with the community, so Firefight should have some more legs than the ODST one which was rather limited. 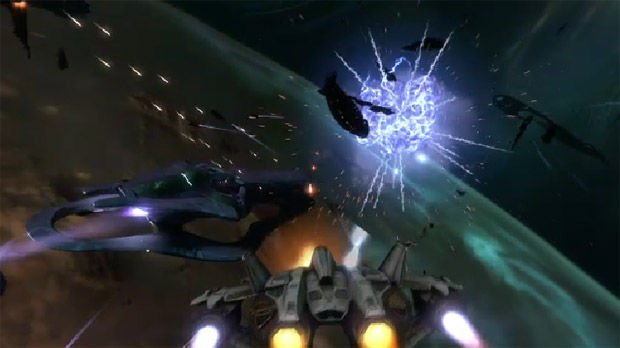 The Forge will have Ascension and Sanctuary map assets from Halo 2 as well as Blood Gulch from Halo 1. Playing co-op on Legendary was too easy in Halo 3, so Reach will have AI that scales to the amount of players playing.

Also new is Credits. Credits are like XP, and can be used on personalization. You can customize around 12 items of your armor in the Armory, such as helmets, shoulder pads, parts of your leg armor, etc.  Armor Effects can be bought and make you look fancy. The “Heart Attack” Armor Effect makes little cute hearts shoot out of enemies you kill, like the Halo 3 grunt skull that made confetti shoot out of their exploded heads. Another one was the Lightning effect, which makes your helmet have lighting shooting around it, which costs two million Credits. The demo playthrough of 15 minutes of gameplay or so gave you around 6000 Credits.  You can also buy voices for Firefight. The Master Chief’s voice is 150.000 Credits and is the only Master Chief-related thing available in Halo: Reach.

Finally, as we were locked in the room because the door handle broke off, I was able to ask Jarrard the one question everyone wants to know: what is Master Chief’s fursona? Jarrard said it would be a tiger. Or a Liger. So that settles that.