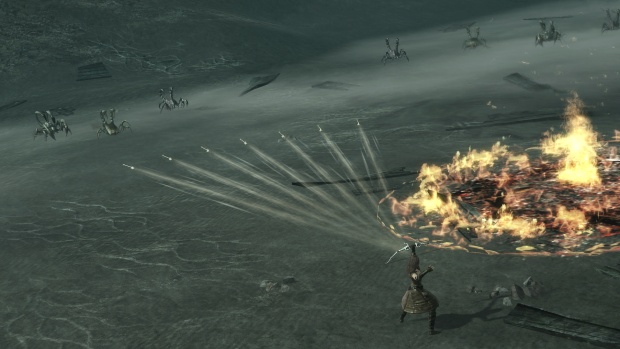 “We are going to make the greatest MMO ever made.”

Big words from ArenaNet considering the competition it has. None the less, they are confident of success against MMORPG’s that already have an established base of players that number into the millions. The will be doing this by not just appealing to the dyed in the wool MMO player but also those, like myself, who have no real interest in the genre. By giving players an experience that is very personal and unique to every player they hope to win back the Massively Multiplayer crown.

Upon creation of your in-game avatar you will be asked to fill in then blanks of your character’s background. Rich or poor, noble or devious, strong or smart; these things will shape not only your outward appearance but also the ways in which the world treats you and the way in which your personal history comes into play. In one of the persistent cities to be found in Tyria, a section called Home, which will reflect your choices as a character from the start, a noble character will arrive there to find close friends who own a local pub getting grief from some thugs whereas a rich character will be greeted by a well to do friend who will throw a fancy party in the local square in your honour.

These however are trivial things compared to the impact that you can have on the greater world in Guild Wars 2. A new Dynamic Event system along with a sped up day/night cycle and weather system that affects any number of variables like enemy numbers, events, NPC character placement and items, creates a game world where an event can take place somewhere without you being there and if you are made aware of it you can choose to go and help or ignore it. Every event however will have varying levels of consequences for the failure of a mission. In the example I got shown a farm just happened to be under attack from bandits as we passed by, if you let the bandits destroy all of the hay on the farm then the cows on the farm won’t get fed and they’ll die which will affect local merchants. It wasn’t a particularly dramatic example but it demonstrated perfectly the kind of ripple effect you have on the game world.

Not all of the things that happen as a result of you failing to succeed in a quest will be as permanent — a building taken over by enemies in a mission where you are supposed to defend it can be taken back again and lost again over and over. It hasn’t been made totally clear yet as to how this will effect PvP but after seeing the passion they have for making Guild Wars 2 the best it can be I have every faith it will be well thought out.

Fans of the original will be interested to hear that as a result of the game’s plot, where a race of Elder Dragons has awoken and brought chaos to the land of Tyria, the villains of the original Guild Wars, the Charr, have been forced to join forces with the other races in an effort to defeat this new threat and, as a result, they will be a playable race in this game.

Rather than the more traditional method of combat found in most MMO’s — that of simply pressing hotkeys until your enemy dies — Guild Wars 2 will have you fighting in real time against your foes in a way that is much more in the vain of RPG fare like Fable. Your character will be able to evade attacks whilst in combat, which gives the whole thing a greater energy than most normal MMO’s and is something that will catch the eye of those so far uninterested in the genre.

The UI is very smart and simple looking taking a small amount of space at the bottom of the screen and looking less cumbersome than most standard UIs found in the genre, however the folks at AreanaNet stated that players would be able to customise their UIs should they feel the need to.

The sense that this is as much a single player game and also a Massively Multiplayer Online Role Playing Game gives the me the feeling that ArenaNet are well on target to achieve their goal of making an MMO for people who don’t like MMO’s. The more immediate and engaging gameplay mechanics combined with an eye-catching beautiful art style will turn the heads of those who have yet to spend any amount of time in a persistent online world before.

Best MMO ever? That is not for me to say, but for the people who may or may not buy this game it could be a very serious contender for World of Warcraft’s crown as the popular MMO on the market — absolutely.