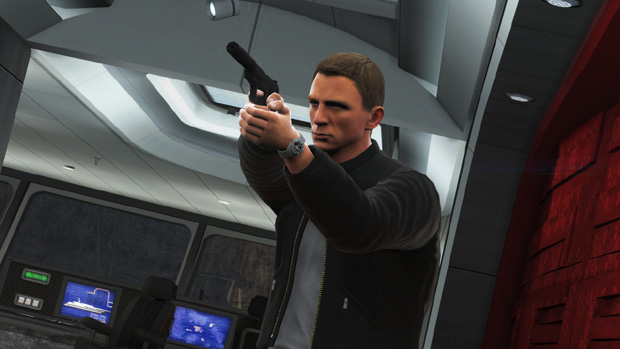 The second helping of Bond from Activision at gamescom nearly caused me to shatter my teeth. During a tense hands-on with the game’s driving section, I had to put my pen in my mouth so I could hold the controller, a poor decision on my part as my jaw ended up hurting for the next three hours. The moral of the story is… good grief, this game was awesome! A bit on the nose as statements go, I know, but frankly, a really good game based on the license has been some time coming.

We’ve been expecting you, Mr. Bond.

This outing in the current Daniel Craig Bond continuity comes to us from Bizarre Creations, the maker of the Project Gotham Racing series, Blur, Geometry Wars, and The Club, so we know that it has a pedigree for making solid gaming experiences. We were shown a two-part demo — a hands-off section set in Istanbul that demonstrated how the action sequences work and the aforementioned driving section that we were allowed to have a play of.

In Istanbul, Bond is searching for a missing British scientist. The trail leads him to a construction site where he wanders into a trap at the hands of the not-so-innocent construction workers. Upon escaping certain death, you are required to make your way past the armed guards on the site and into the underground area. Two ways of playing through the level, one stealthy and the other more aggressive, showed just how the mechanics of the game will support any style of play.

The first thing that we are introduced to is Bond’s one and only gadget, a smartphone. Its function in the game is exactly the same as that of the X-Ray mode in Batman: Arkham Asylum — turn it on and it creates an augmented reality view of the level that shows points of interest around you. The key difference between Bond and Batman is that the mode has been gimped in Blood Stone — if you attempt to walk around with it on, the view will go glitchy as your phone loses signal, preventing people from playing this game with an interlaced light blue tint. To be honest, the action sections of Blood Stone do crib ideas from a bunch of games, mostly Batman: Arkham Asylum, Splinter Cell, and Uncharted 2, but it takes those elements and combines them so effectively that it’s forgivable.

Sneaking around the construction site is a slower but much more satisfying affair. Use of context-sensitive takedowns, like leaping out from behind corners or pulling guards through open windows, will be your main method of getting rid of guards, though a successful melee takedown will award you with a token to use the “Focus Aim.” Focus Aim quickly targets and kills one enemy per token, but you have a limit of three so that you can’t just run around essentially pressing the “win” button.

The more action-oriented approach will see you getting through the level quicker while running more of a risk of getting shot. You can still perform melee takedowns, but instead of taking cover and quietly dispensing the target, you’ll charge up to them and punch them silly or smash them face first into a nearby piece of scenery. The no-stealth melee takedowns also reward you with Focus Aim tokens, so you could clear out an area fairly quickly with a little good timing. Be under no illusion, however, that it will be easy, for one little slip-up can cost you dearly.

With the armed guards dispensed, Bond makes his way into the underground, a huge dark cavern with wooden rafters to walk across. There are no enemies to kill here, so it’s frankly too quiet. All of a sudden, a blinding flash of light illuminates the area, and there, dominating the rear of the cavern, is a gigantic drill. The drill starts moving towards you, grinding up everything in its path including the wooden platforms. As it gives chase, you’ll be leaping from platform to platform and shimmying along wooden beams to stay ahead.

The Istanbul level ends with a brief look at a car chase through the streets in the classic Aston Martin DB5, perfectly setting up our viewing of the next section of the demo. The action shifts to Siberia where Bond (now in his DB9) speeds off into an industrial area, giving chase to a train, with Bond’s girl Joss Stone in the passenger seat. As you race through the factories, swerving between trucks and vans, a helicopter gunship is raining bullets and bombs onto the road ahead. You escape from here onto the Siberian ice floe as the helicopter pelts the fragile ice, causing it crack and break apart as you try to drive across it. It’s exciting, damned exciting. The driving feels like a slightly more arcade-like Project Gotham Racing — you’re not expected to be proficient in hand break turns and racing lines, but if you are expecting to beat the level by simply holding down the accelerator, you’ll only end up spinning out or crashing.

You already know my feelings about Blood Stone, as I stated clear as day in the opening paragraph. The game uses popular mechanics that have appeared in other series, but they are integrated so well that it really isn’t objectionable. If anything, it helps to give the game the same sense of excitement that its cinematic counterparts do. James Bond 007: Blood Stone is due early next year, and until then, I’m going to put on my tux and start drinking vodka martinis.