The renaissance was a time of great invention and inspiration. However, it might never have come to the city of Rome had it not been for a guild of assassins stalking the shadows, eliminating the repressive elements of society with lethal precision.

That might not be how the history books tell it, but this is how the events took place in the single-player portion of Assassins Creed: Brotherhood.

The beautiful city of Rome is your hunting ground, and at roughly three times the size of any city found in Assassins Creed 2, you can be sure that there are plenty of opportunities to stealthily tail your prey from the rooftops with deadly intent in mind. By freeing the people from their oppressive rulers who hide in twelve towers dotted across the city, you will be a catalyst for the beginning of the Renaissance. Eliminating the powerful residents of these towers and burning the structures to the ground causes art and commerce to blossom with your encouragement.

This system, called “Rome upgrade,” replaces the Villa upgrade system of Assassins Creed 2 with you investing in the local economy — albeit in a way that will benefit you. In the playthrough we were shown, Ezio approached a boarded up storefront and was asked if he wished to invest in it. This has benefits for the player above just the aesthetic change to the environment. For example, newly opened-up tailors can provide you with new outfits. 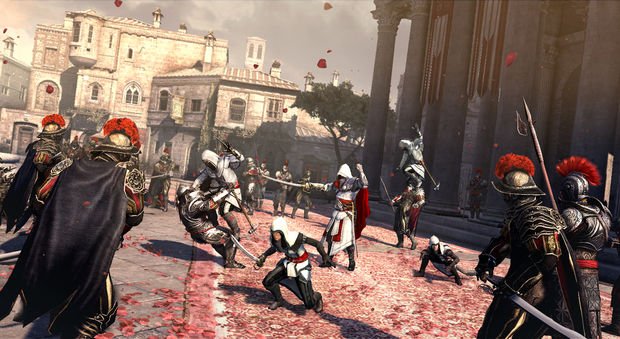 All of this improvement, however, has to be fought for. And only a mad man would try to free a whole city on his own, which is why in this Assassins Creed, you’ll be able recruit local rebels to your cause in order to form the titular Brotherhood, a group of skilled killers with a similar taste in white robes. Your brothers, on the other hand, won’t start out with such incredible skill. As such, bringing them on missions will grant you points that can be used to level up weapons and armor. In the missions you undertake yourself, these improvements won’t be quite so apparent thanks to your posse eliminating designated targets and providing distractions at your behest.

The improvements you make to members of your Guild of Assassins will be of great benefit to both you and them when you send them out on missions. You can contact your guild using carrier pigeons, which are found in pigeon coups scattered throughout the game world. Additionally, you can send one of up to twelve possible recruits out into continental Europe in order to perform tasks that will earn them more skill points and impact your mission in Rome. The assassin you send out into the field won’t stand much of a chance unless you level up his armor and weapons, which is why it is important to take them out on missions with you. Death when your assassins are away from your side is possible and, most importantly, permanent. 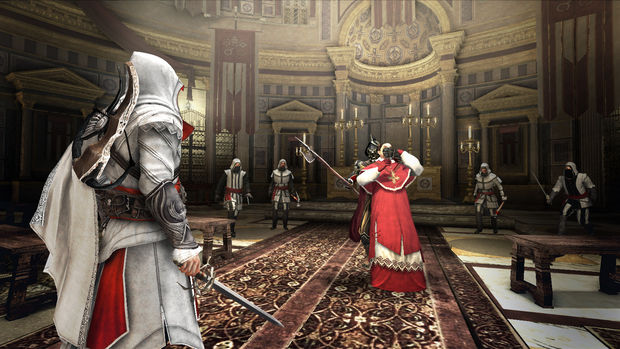 Your team can be as individual as you want to make it. You choose what weapons and tools they take with them — even what sort color and style of robe they wear. Getting anything out of your brotherhood will be entirely dependent on just how much you want to put in.

To prevent you from simply ordering your men to kill everyone so you don’t have to do the legwork or face certain death in battle, the Brotherhood assists operate on a cooldown that gradually builds itself back up over time. However, you can grab yourself an extra assist that won’t affect your cooldown timer if you get any of the Brotherhood tokens found in the streets and rooftops of Rome.

With only limited use of your brothers in a mission, the skills that you have are key to your survival. The combat has been overhauled and now operates much like Batman: Arkham Asylum‘s flow system. If you keep your flow of attacks going without being hit, the damage you do becomes greater. It’s a system that worked well in the Dark Knight’s outing last year, so the inclusion of a similar system in the equally stealthy Assassins Creed series makes a lot of sense and looks solid.

With the newly tuned-up combat system and the series’ familiar, elegant stealth elements, you will have to sneak into one of the twelve towers and dispose with the most-powerful person within. The way in which you do this is open to how creative and sneaky you wish to be. Straight up knocking on the front door and killing anything that moves is possible, if a little foolish; especially since there are a myriad of secret passages and back doors that you could take instead. 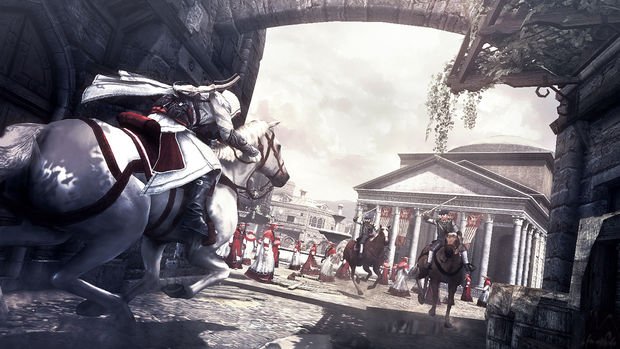 Upon eliminating a tower leader, the guards’ moral will drop; some will still try and fight you, but most will flee in terror. The tower is now yours and it’s time to bring it down. Outside the tower, Ezio scales the building, leaping between window ledges en route to the tower’s roof. A few guards who have yet to abandon their stations stand a couple of feet below, unaware of his presence. Brotherhood assassins are summoned to dispose them quickly and the ascent continues. At the top, a cutscene kicks in showing Ezio stalking about with a flaming torch in hand. The building already beginning to burn quite heavily, he turns, runs and leaps from the rooftop into the safety of a bale of hay.

Ubisoft is promising that the single-player will have up to 15 hours of gameplay for you to discretely kill your way around Rome, including developments with Desmond Miles that the Ubisoft representatives didn’t wish to elaborate on. The single-player looks very strong, if not the best in the series so far. When combined with the new multiplayer mode, Assassins Creed: Brotherhood looks like a tempting prospect indeed. Keep a stealthy eye on this one due out November on PC, Xbox 360 and PlayStation 3.