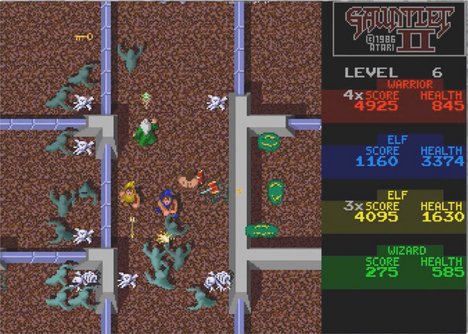 Sony has just announced that the PlayStation Network downloadable classic, Gauntlet II, will be available on May 3 for $4.99 — no silly points scheme, you actually know how much you’re paying. Here are the details on this oldie but goodie:

Play as the Warrior, Valkyrie, Elf, or the Wizard in Gauntlet II™! Enter a dungeon with several hundred levels as players defeat monster generators that churn out wave after wave of enemies. Players can destroy them to clear the level and find their way to the exit! Collect food for health and magic items for power-ups while plowing through the dungeon. Brought back and available for download exclusively on the PLAYSTATION®3 computer entertainment system, it’s time to re-experience this classic Midway arcade title.

Replay All Your Favorite Characters – Choose from one of four characters, either Thor the Warrior, Merlin the Wizard, Thyra the Valkyrie or Questor the Elf. Dungeon Crawling Action in 100+ Unique Levels –  Players will fight their way through levels in new ways by having the playfield turned in steps of 90° or the classic invisible walls. Control Your Enemies’ Fate, Control Your Own – Players will race to make the enemy “It” and avoid becoming “It” themselves! Release the curse that draws all enemies towards you by touching another player or entering the exit. The medieval game of games is on! Multiplayer Action – Play online against other players through the PLAYSTATION Network. Track wins, and see how everyone stacks up against other players through dedicated leader boards.

Wow, a classic game, with added multiplayer and other functionality, for only $4.99? Hmm, still think the Virtual Console isn’t a rip off?