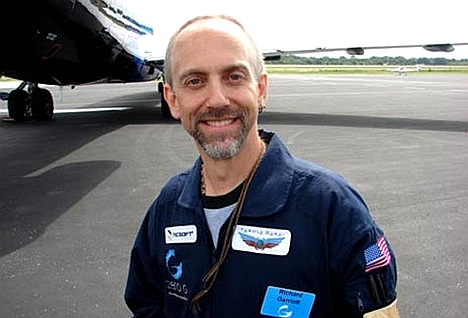 Ever come back from the Earth’s orbit and realize that you need to quit your job and take a new direction in your life? That’s exactly the conclusion NCSoft’s Richard Garriot came to upon landing on our pale blue dot.

In an open letter to NCSoft and fans of his latest MMO Tabula Rasa, Garriot said that the trip to space was an “unforgettable experience” that “sparked some new interests” outside of MMO development. He also thanked “loyal players” for hanging around TR during its horrendous launch, as well as his developers for pumping out content on a monthly basis.

So what will Garriot be doing now? He doesn’t specifically address that in his letter, but I have this suspicion that his next project will have something to do with space, rockets, jet fuel, Ultima, or powdered orange juice. If it’s not any of these things I won’t be surprised. I’ve never been able to predict what “Lord British” will do next.

Garriot’s letter is included after the break.

Fellow Soldiers of the AFS,

I am happy to finally be able to write the players and community of Tabula Rasa. We’ve been on quite a journey together. First in creating a game unlike any other on the MMO market, then growing a loyal community and finally launching the game and its players into space with Operation Immortality. It has been quite an unforgettable journey, one that I will treasure for the rest of my life.

I am very grateful to you loyal players for sticking around through what I think we can all honestly say was a rough launch. I thank the development team for pushing hard to get polish, updates and new content out every month since launch…a feat that I think is unusual in MMO development. They have a lot to be proud of.

Many of you probably wonder what my plans are, now that I have achieved the lifelong dream of going to space. Well, that unforgettable experience has sparked some new interests that I would like to devote my time and resources to. As such, I am leaving NCsoft to pursue those interests.

This news is difficult for me to deliver. I am honored to have worked with the team I’ve had and I’m grateful to the community who makes this game so unique and fun.

Thank you and farewell.