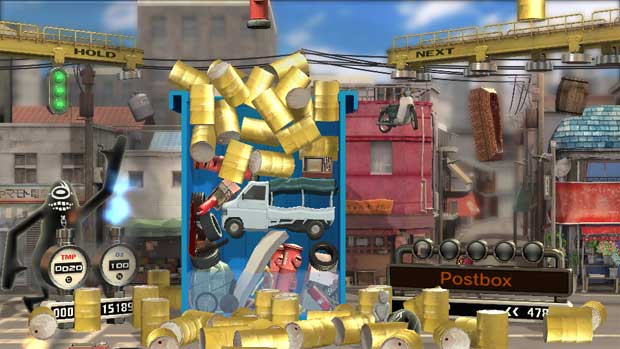 Last year’s Tokyo Game Show, as always, was full of surprises. But I will never ever forget the highlight of Sony’s PlayStation Network offerings, Gomibako.

The easiest way to describe it is “Tetris with trash.” You smash and burn trash — toilets, barrels, stuffed animals — to score points. Because why the hell not? Today Sony has annoucned that the game will be coming to North America this Spring as Trash Panic. We don’t expect much about the game will change from its Japanese release, and quite frankly, we’d be mad if anything did.

The announcement comes along with Sony’s “Earth Day” initiative, saying it will donate $1 for every 10,000 PlayStation Network downloads/transactions. Sony has also created a “Save Our Earth” film section on the PSN video store, including Cloverfield, The Abyss, and The Day After Tomorrow, presumably because all of those movies feature things that are trying to f**k the Earth up.

So get to download, save the planet, and start practicing your trash packing skills for Trash Panic immediately.