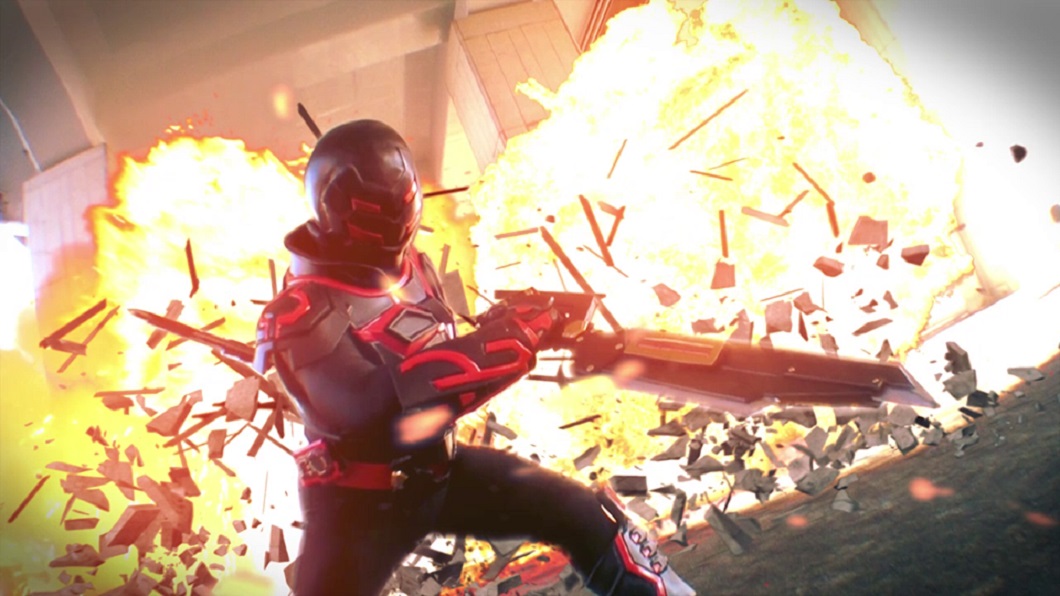 If you were to ask me about a genre that lacks variety, my answer will always be tokusatsu (live-action special effects). During the ’70s and ’80s, there used to be a huge offering of titles, but their numbers started to decline as Japan started to face economic issues. Of course, one of the series that remain alive to this day is Super Sentai, the franchise that’s adapted into Power Rangers.

Since modern toku productions consist of at least four yearly franchises, the genre doesn’t have enough stuff for those who’re looking for a ton of options. The problem with this scenario is that if a person isn’t impressed with any of the programs that air during that year, then they have to wait until the next one to see if something catches their eye.

As tokusatsu production companies shy away from bringing new heroes to the mix, one man took a stand and decided to create the types of shows he wants to see. This resulted in the creation of Garage Hero, an independent team in Tokyo that consists of foreigners and Japanese residents. The thing that makes them special is that their creations are perfect for people who grew up with Power Rangers and those who love campy titles. 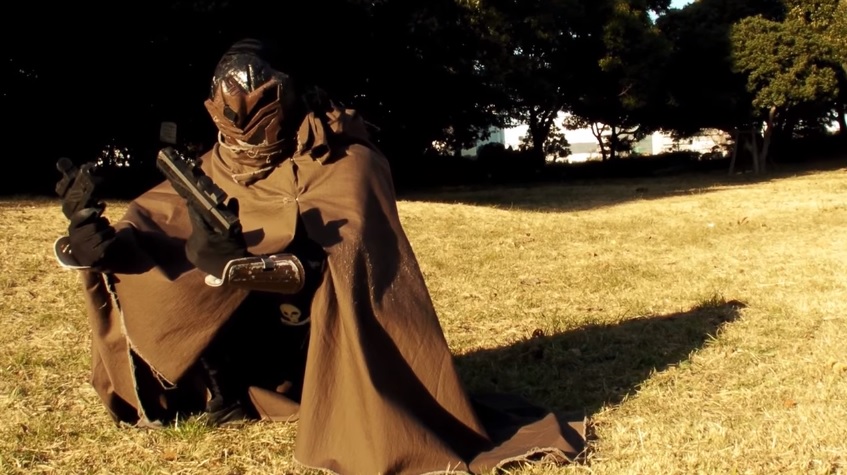 One of the crew’s early projects is a film called Gun Caliber, which is the first independent tokusatsu movie that features a foreigner as the Star, Director, Writer, and Producer. The man behind this feat is a Filipino-Canadian called Bueno, who’s also the founder of Garage Hero. Of course, this production’s status in making history isn’t the only thing that it has going for since the guy utilized his inspiration from the things he loves to create something special. On top of that, this flick is one of the first transforming hero productions where two monsters get it on.

With toku shows (such as Power Rangers), Mystery Men, Watchmen, along with Bueno’s experience from living in Canada and Japan being among his inspirations for the movie, Gun Caliber mixes raunchy humor with society-related issues. The film is set in a world where the government regulates heroes’ actions as a means to prevent them from abusing their status.

In regards to the comedy aspects, Gun Caliber uses this premise to establish its world through the film’s washed-up hero, Soma Kusanagi/Gun Caliber, going through a bunch of sequences where he messes with the people of Japan. To an extent, most of these scenes feel like an R-Rated take on Benny Hill’s skits.

For an 80-minute film, some these segments may feel like they’re overstaying their welcome, but they served their purpose in the grand scheme of things. One of the reasons why Bueno took this route was that he wanted to create a production where the cast pushed the plot forward, instead of relying on a series of events to do the work. In the end, it worked well in building up to the movie’s true story and fight scenes, along with the moments that lead to Soma doing something heroic.

Even though the team was working with a small budget, they were able to put it where it counts. The entire cast delivered well on their performances and the people involved with the fight scenes didn’t pull any punches. In fact, one of Gun Caliber’s strengths is how the humor and action go well together. Gun Caliber and his opponent’s movements made sure that the audience feel each blow and the camera shots ensure that their hits were shown in a manner that gets people excited.

Another nice addition to the movie’s nice aspects was Gun Caliber using a gun that lets him shoot different types of bullets, with one of them being a shout-out to the spread shot from the Contra series. Then there’s a villain that’s a reference to Mr. Karate from the Art of Fighting and King of Fighter series, as he was depicted as a deadly opponent. For the most parts, these tidbits don’t overpower the rest of the film’s content since it feels right at home with its other ridiculous bits. 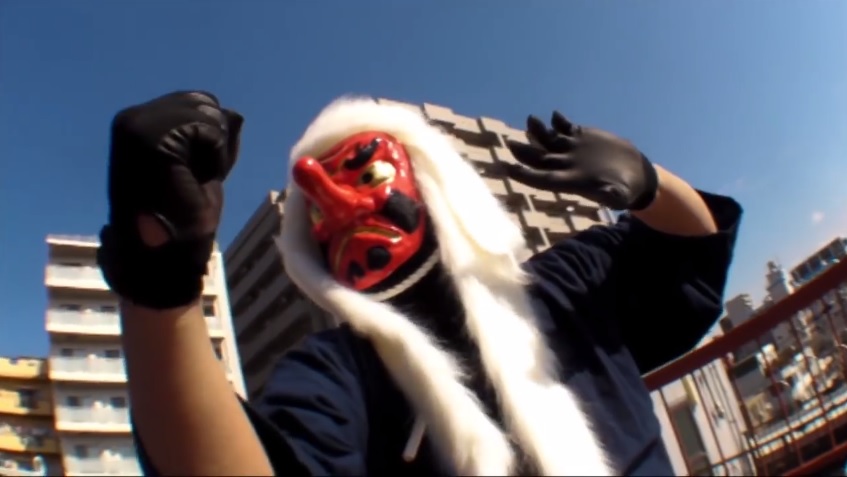 Seeing that the whole movie was created without a script, it’s impressive that Garage Hero managed to create an entertaining production. When I interviewed Bueno for Japanator in 2015, I asked him about how he managed this feat and he said: “You got to keep it fun, you know. With these movies, because of the fact that they aren’t epic movies at all, you just got to have fun with it. In the end, you’re just making a fun movie. If you don’t have fun, then the people watching it don’t have fun either.” In fact, this workflow made everyone’s performance feel natural– even if they were winging it.

Since Gun Caliber was made seven years ago, the team has grown and changed from their time with the film. This was shown in their 2014 production, Yakuzambie, which was the result of Bueno being inspired by Grindhouse films and Yakuza: Dead Souls to make a short about a Yakuza member protecting the daughter of his deceased boss from a swarm of zombies. All in all, the whole thing did a nice job in making me feel like I was watching a trailer for a fun ’80s B-movie– especially the part where the Yakuza member breaks a zombie’s neck with his foot.

While we’re on the topic of the group trying different types of productions, they also made a six-episode Web series called Ayakashi Zamurai during Toei and YouTube Space Tokyo’s Jidaigeki (period dramas) program. The show is a comedy about a traveler named Sumaito Meganosuke and his fox girl partner battling against possessed individual while delivering corny lines. 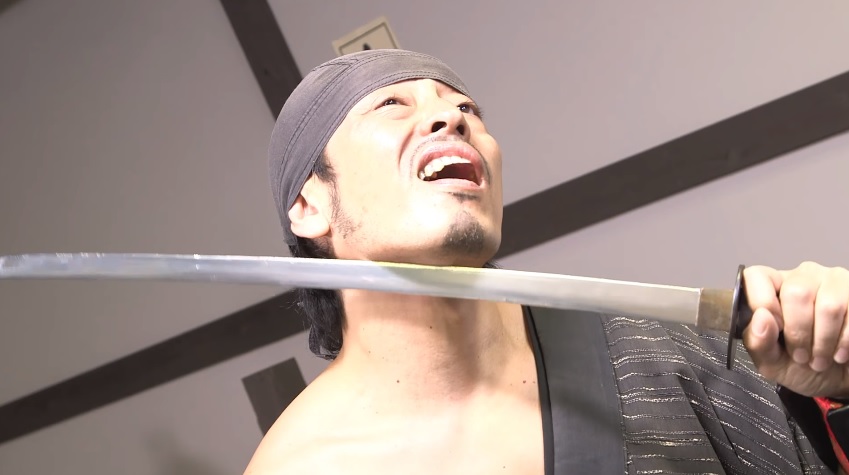 Other than that, the team has a tutorial series called Tokusatsu Film School, which they made to help those who’re interested in making their own toku productions. Compare to most “How to videos,” their lessons get straight to the topic you want to learn about, instead of having you sit through something that’s over an hour. The great part about it is that each segment gets the message out effectively. Then there are their Action Shorts, which provides viewers with quick scenes that show off the crew’s abilities. Aside from being a bunch of fun fight sequences, they’re a good example of showing people how they grow with each piece.

As for their current stuff, Garage Hero is working on Gun Caliber’s sequel, Strega. One of the great parts about this production is that Bueno will get to show off the results of his training with Seiji Taikawa, the Suit Actor for most of the modern main Riders in Toei’s Kamen Rider franchise. Speaking of shows about heroes with bug-eyed helmets who ride motorcycles, Soma’s new suit for the upcoming movie was made by Daisuke Komatsu, a Suit Creator that worked on the monsters costumes from Kamen Rider 555 to Kabuto, which shows the production’s increase in quality.

When Bueno was working on his early stuff, he received advice from the likes of Koichi Sakamoto (Mighty Morphin Power Ranger’s Action Choreographer, Zyuden Sentai Kyoryuger’s Director) and Hideki Oka (Ultraman Orb: The Origins’ Director, Bima Satria Garuda’s Writer). Based on the stuff I’ve seen from them, they’re the kind of people who do their best to have a blast with their projects. Since the viewers can feel Garage Hero’s fun vibe from their content, this is one of their strengths that helps them overcome their limitations.

In a genre with at least four modern titles, Garage Hero’s stuff feels like a breath of fresh air. Considering that Gun Caliber won a R.O.I.N. (Reward of Indomitable Nature) at CIM Sueca ’15 and made an appearance at Urban Showcase ’16, it shows that there’s an audience who’ll welcome their content. Hell, the fact that the film beat Nuiguruma Z, the movie where Shoko Nakagawa (Gurren Lagann’s Opening, Fullmetal Alchemist: Brotherhood’s fifth Ending) plays as a bear-themed magical girl that fights zombies, at Stiges International Film Festival ’14 is a good example of a fun independent project being better than a higher budget production.

Now that Garage Hero was able to team up with SRS Cinema, a distributor that focuses on underground movies, to release Gun Caliber as a limited edition Blu-ray and VHS, they were able to get closer to exposing more people to their original tokusatsu titles.

As SRS Cinema prepares to showcase Gun Caliber at Cinema Fantastique and Frostbite International Film Festival, I’m hoping that the crowd’s reaction will help the team achieve their goals. In the meantime, it’ll be neat to see how they’ll grow throughout the rest of 2017 since they’re a group who’re putting their heart and soul into expanding a live-action genre.