Sure, the Trollhättan, Sweden-based development team The Bearded Ladies Consulting is a small team. Founded a mere two years ago, at least two members weren’t even making games at the time — one was a liquor store salesman, another a janitor.

But that’s not to say it doesn’t have its share of great game ideas, and isn’t capable of producing quality content. In 2010, the developer released an original title, Landit Bandit, on the PlayStation Network. Earlier this year it reworked the classic Amiga classic Pipe Mania for PS Minis as Pipe Madness; it’s currently working on an Android version of the title, as well.

For its next trick, The Bearded Ladies has something else in mind: it wants your ideas for its next title. And not just some ideas that it might implement into the title. It wants all of them.

This past February, The Bearded Ladies launched its “Gamocracy” project, a completely original take on how a game is designed: by a community of gamers. On February 18, the developer threw out the most basic of premises — it was making a PS Mini action platformer. With that blank slate, The Bearded Ladies are leaving the direction of the game up to the community.

Spanning over the course of 12 weeks, The Bearded Ladies will pose a weekly “challenge” to the community, based on how the studio would design a game internally. Week one, for instance, challenged folks to submit a protagonist for the game, along with a supporting gameplay mechanic. From the pool of submissions, The Bearded Ladies will choose five, based on what they feel is feasible for the project. They then put their selections on Facebook, where the community will vote. When a winner is chosen, the developer begins implementing that into the game’s design immediately, the winners credited within the game when it ships. 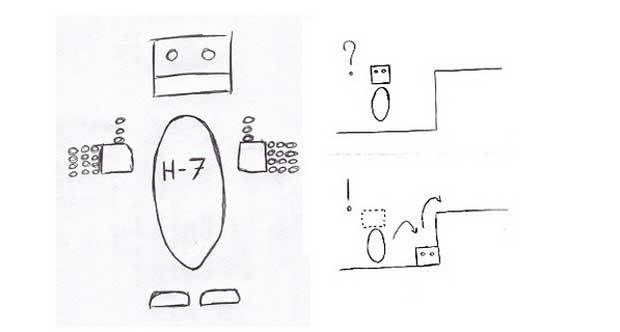 Out of the gate, The Bearded Ladies are already impressed with the submissions. Studio co-founder David Skarin says the winning concept — by an Italian game design student — is simple yet brilliant. It’s about an android named H7 that can remove his head which can be used as a pedestal, weapon, and more. In short, it’s an original idea, and perfect for a smaller PS Minis project, and that’s exactly the kind of stuff they’re looking for.

“Everyone was like ‘Yeah, that’s interesting,'” Skarin tells me, referring to people’s initial reactions to the Gamocracy project. “We showed [the week one winner] to a bunch of people at GDC and I think everybody said ‘Oh my god, this is fucking awesome.’ This is a unique platformer, you know? This kid is probably going to have a job before he’s out of his school.”

Take a step back and look at the Gamocracy project, and it looks a bit like a fan and community-driven game development project. But unlike many of those, this one is actually going to see the light of day.

“We had been involved in a lot of community projects before we started out company,” Skarin says, “and we know that they are never, ever finished because nobody wants to the real work.”

With the “Gamocracy” project, The Bearded Ladies will assure that it gets done, doing all of the “heavy lifting,” so to speak. So while Skarin is fine if you want to think they’re just fishing for ideas because they don’t have any, don’t call ’em lazy.

“We’re doing twice the work over regular production. Much more than twice to make it this way,” he says, keeping in mind all of the forum and community interaction the studio is involved in for Gamocracy. “So we’re not lazy, but yeah, you guys come up with the creative ideas definitely. That part is right.”

“We’re gonna make sure that they work,” he continues, “and we know, as game developers that have produced titles, what works. There’s a lot of stuff that works on paper that doesn’t work in reality, and we know how to cut that away and we do that job as well.”

He adds that while The Bearded Ladies have the “producer” role and final call on ideas, the ultimate goal is to leave the community ideas untouched when possible.

“We’re not going to add a bunch of extra gameplay,” he says. When the game does hit PlayStation Network as a downloadable title, it will truly be a game that the community has shaped and designed.

The developer is also being completely transparent about the process, updating on the PlayStation Blog regularly with updates. It’s even working hard to get out images and videos of the latest builds of the game, so the community can see their work and ideas in action.