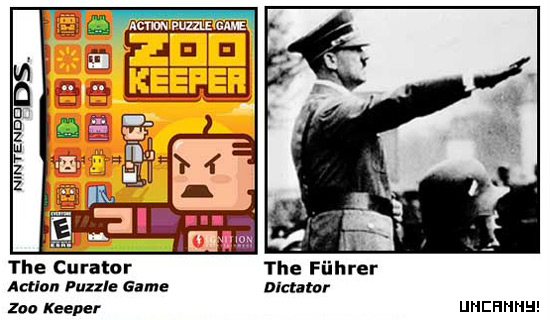 Hollywood steals ideas constantly, authors have been lifting plotlines for millennia, and Glengarry Glen Ross was directly stolen from a dream I once I had via David Mamet’s brain-draining dark magic. Since every other creative medium falls into the trap of repetition (intentional or otherwise) so often, it’s no surprise that gaming would follow the same trend.  Of course, in a videogame, the creators create literally everything, so not only do you have lifted storyline, you also have lifted characters.

While reading this thread on the ‘GAF, I came across this Web site, a ridiculously detailed compendium of videogame lookalikes — characters that look like real life people, other characters or even inanimate objects. Some are obvious (Big Boss and Kurt Russell), some are cliché (Tidus and Meg Ryan) and some are just confusing (a Mog and some guy dressed as a Mog).

Of course, some, like the one at the header of this piece are hilarious — possibly only to me. Then again, I’ve never claimed to be doing this for any reason other than it amuses me personally, so if you don’t think the presence of a fascist dictator who murdered millions of people in last century’s worst case of genocide within a handheld children’s puzzle game is as hilarious as I do … well, I hate you.

[Side Note: The site also makes a compelling argument for the idea that David Bowie is actually in every game. It’s difficult to link directly to it, so I’ll merely give you this as motivation to go find it on there yourself. — Nex]